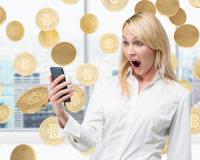 If you had to ask most people to name a digital currency, the first answer you'd probably hear is Bitcoin.

Since 2009, Bitcoin has swept across the world offering new ways for people to transact, transfer money and even make money.

But how did bitcoin come to be?

Well first we have to go back to before Bitcoin was even an idea…
The Liberty dollar: The inspiration behind Bitcoin

In the US, the Constitution forbids people from printing and minting their own money.

They didn’t want anyone competing with the dollar. And because no other form of currency was allowed, people were forced to rely on the dollar.

But in 1998, a man named Bernard von Nothaus tested the US government’s resolve. He created the Liberty dollar – An alternative form of currency minted in gold, silver, copper and platinum.

It was available to US citizens to use in three forms; Gold and silver; paper as receipts and in digital form.

Obviously the US Government didn’t like this and to this day, Bernard von Nothaus is awaiting trial for counterfeiting, fraud and conspiracy.
But the interesting part to this story is, Bernard von Nothaus’ innovation inspired Satoshi Nakamoto (the “father of Bitcoin”), to create and design Bitcoin.

Bitcoin is a digital asset that can be freely transferred across the internet. It doesn’t exist in physical form, there’s just a reference to your Bitcoin holding stored on a public ledger called Block Chain, which keeps a record of every bitcoin in existence and records every bitcoin transaction.

So what makes Bitcoin one of the biggest breakthrough currencies of the 21st century?

They keep track of money as it moves from one account to another and we get charged for this process.

We trust that these banks and credit card company’s credits and debits will balance every month. But how do we know that this data isn’t flawed, corrupted or fake?

We don’t. We just have to trust our banks.

But a “financial system” that cuts out these middlemen could be faster, cheaper and more secure.   Because the Bitcoin block chain is public, there’s no central authority controlling it.

Bitcoin’s can’t be forged, printed or debased at will, by governments.

It’s not far-fetched to say, Bitcoin could become a technology that will replace banks and bankers and this is just one of the reasons why it’s becoming more popular as a currency and speculative investment.

Related: Put this bitcoin blueprint into action today and discover...  How you could mint your first million from cryptocurrencies

Has Bitcoin sealed its place in the world as a viable alternative currency?

Bitcoin has succeeded as a technology, but still has a long way to go politically.  Many regulators don’t consider Bitcoin to be a currency and still have a long way to go and are struggling to understand this phenomenon.

But the blockchain technologies offer far more than currency, as they give us a way to decentralise human technologies, without the need for central authorities.

This could include insurance contracts, property sales, and just about anything else you might imagine.

What’s more, Bitcoin’s popularity has spread to a point where people and companies are doing business with it.

You can buy everything from flights to furniture using Bitcoin. And it’s even becoming a savings tool for some people.

Many people are storing savings in Bitcoin and other cryptocurrencies. One popular way to do this is with a paper wallet that’s kept offline.
Although Bitcoin is somewhat experimental, it’s survived without a glitch since 2009. And each day that it survives, it gains popularity and squashes a few more doubters. How to profit from Bitcoin and the Crypto Revolution

Recently, I was introduced to one of the foremost tech heads today, Sam Volkering.

Sam is a genius on the subject of Bitcoin and Cryptocurrencies. He’s been following it since 2009. Quite frankly, I don’t know anyone else right now who knows as much about the subject as he does.

Sam’s been researching the market for years. He’s on record as far back as 2013 backing cryptocurrencies. In fact, Sam went live on US television in 2014 to talk bitcoin and how it could become a significant and profitable part of the financial system.
Fast-forward to today…

Sam has just released a brand new book called “The Crypto Revolution: Bitcoin, Cryptocurrencies and the Future of Money.”

In his book, Sam explains everything to do with Bitcoin and cryptocurrencies.

More importantly, it shows you how to profit from the cryptocurrency revolution.

The good news is, I’ve arranged for you to get a free copy of this book which you can grab right now!

As Sam says, “There is no bigger chance than right now for investors to get in on the ground level on a world changing, potentially life changing investment opportunity.”

Until next time,
Joshua Benton, The South African Investor

PS: Cryptocurrencies have been taking the investing world by storm. Find out more here...