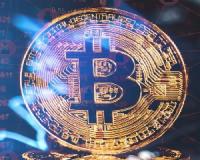 I have an important notice for you.

First, I am not a BIG bear when it comes to Bitcoin. I know in the medium to long run, it's going to continue to make all time highs.

However, since November 2021 I have been shorting (selling) Bitcoin and have been making decent profits.

And it did exactly that.

The target was hit in just under a month.

And guess what? I am still not happy to buy ‘the dip'. I see quite a bit more downside to come. Looking at the daily chart of Bitcoin, we can see it’s been moving in a strong Down Channel (shaded area) since 11 October 2021.
It’s been bouncing down the channel where it’s continued to make lower highs and lower lows.
And now that it has broken the support level (Black horizontal line), means we can expect even more selling in the market.
This will take the Bitcoin price to the next price level of support.
Which in this case will be at $30,000.
Here’s how to profit from the next 25% Bitcoin drop
First, I’ll sell and profit by going short Bitcoin CFDs with a reputable broker i.e. Rand Swiss or Velocity Trader that offer cryptocurrencies.
And ride it down until it hits my next price target.
Second, you can get started today with the Crypto Market with South African Investor.
Tags: bitcoin, crypto, cryptocurrencies, timon rossolimos, analyst, red hot trader