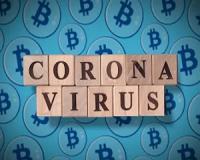 Just when you think, things couldn't get any worse with the financial markets…

Last week it did…

We also saw major crashes in the cryptocurrency markets.

I'm talking about cryptos falling (in the past five days):


HOT UPDATE:
Pickpocket Trader just closed a massive 323% gain on the US 500…
In the same week, his followers could've banked another 51.57% % on brent crude and 15.8% on Merck!
Read on to find out how you can get in on the next big gain!
________________________________________
REASON #1:
Bitcoin enters a liquidity crisis
If anything, the COVID-19 has sparked a major liquidity crisis.
This is causing financial markets to crash as well as ALL safe haven assets including bonds, crypto-currencies and precious metals.
What you need to know is this…
A ‘Liquidity Crisis’ is when major investors decide to exit out of their positions at the same time…
This is what happened with Bitcoin as it crashed over 33%, in a few days.
As the sellers outweigh the buyers, this leads to investors desperately trying to cash out by exiting at lower prices…
This was on the back of a number of events that took place last week including:
• The US announced a national emergency
• The Fed cut interest rates down to 0
• Italy’s hospitals become overrun with patients and fail to treat all
• Spain declared a nationwide lockdown
• Travel bans increased as 155 countries have been affected
• Uncertainty with global markets unprecedented moves
According to data from CoinMarketCap
“In the past 24 hours, trading volume for Bitcoin totalled just $31 billion, down from peaks of near $80 billion — the highest on record.”
And so, with the selling bringing down the price to new record levels, this leads to the next reason…
REASON #2:
Cash is once again the safest option
Bitcoin does not have any mechanism (circuit breaker) like traditional markets that stop trading if the price drops too much…
With the 33% crash we saw, this could fail to attract new investors into the market and scare away previous investors permanently.
And so the safest most risk-averse action to take, is to liquidate all financial and alternative assets and rather build-cash reserves for the uncertain future…
Once again Cash is KING.
As clichéd as it sounds… It’s a cliché for a reason.
Even Kevin Kelly, lead analyst at a crypto-currency analysis firm in New York, says:
“You’re getting to a point where markets are pretty frantic across the board, and today is a move toward cash,”
REASON #3:
Bitcoin broke below its 3-year uptrend Here's how you can profit from Bitcoins next crash
First, you can sell (go short) and profit from Bitcoin CFDs. You can do this by signing up with one of our recommended brokers…
Second, you can read millionaire and Crypto-currency expert Sam Volkering's book on how to profit from the crypto revolution.
Second, Trader X could soon be adding crypto currencies to his Pickpocket Trader service... This will be the first Crypto Currency short term trading service launched in South Africa.
Trade well,

Bitcoin VS Coronavirus
Rate this article
Note: 3.6 of 5 votes