Does blockchain hold the answer to the internet's biggest challenge? 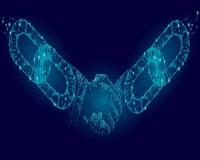 In the growing world of online, data privacy is of the utmost importance.

Even more so if you're a company that stores people personal data.

In this day and age, if you fail to protect personal data, you will suffer major backlash.

Or the time 500 million customer details were stolen by hackers from Marriott Hotels last December.

Not only did both companies fail to protect consumer's privacy, but they also lost the trust of people.

So how do companies solve both problems?
Recommended:
________________________________________
“If you want to make a killing from cryptocurrencies – read this bookas FAST as you bloody can!”
I’d like to rush you a copy of my book, Crypto Revolution, right away.
Inside you will find everything you need to understand this financial revolution…
And take maximum – potentially life-changing – advantage of it.
Including the name of the coin I am calling “The Bitcoin Killer”…
A cryptocurrency that could ultimately climb 20,000% from where it sits today.
That’s the kind of move that turns R2,500 into R500k over the longer term.
You’ll get the name of that crypto… my full case for why it could rise to become the #1 crypto in the world…
And my full analysis on the entire cryptocurrency landscape, all in my book.
________________________________________
Introducing ‘zero-knowledge proofs’…
At the moment companies store our data in big centralised databases. So when the database gets hacked, the hacker gets access to everything.
A way to make this information less hackable is to store it on a blockchain such as Ethereum. Once data is on the blockchain, you can’t hack it or mess with it.
The network is secured by thousands of independent computers all around the world. In order to hack it, you’d need to control more than 51% of its network, which on a blockchain like Ethereum is essentially impossible.
However, the one weakness on this network, is all the data is public and accessible to anyone. While you can’t hack it, you can still see the data.
This is where ‘zero-knowledge proofs’ come in…
Zero-knowledge proofs basically let you prove you have certain data without ever showing anyone that data.
Let’s say you want to prove to an airline you’re allowed to leave the country, but you don’t want it to have your passport details on file, in case the company gets hacked.
Instead of giving your passport details, you give proof that you own your passport and are able to fly.
This proof happens automatically. You just log in to your identity dApp (decentralised app) running on the blockchain.
This means you can prove your identity to any company without ever giving them any information about yourself.
________________________________________
Must see:
A straight up offer from one of South Africa's top financial analysts and small cap experts, Francois Joubert:
"Let Me Pinpoint the Fast Moving SA Small Caps that Could Make You 100% or More...
And share everything you need to potentially profit from them directly with you each week"
________________________________________
JP Morgan and EY created their own zero-knowledge proof tools for use with Ethereum
In June, two of finance’s biggest companies, JPMorgan and EY released free zero-knowledge proof tools for use on Ethereum.
From Crypto Website, Coin Desk:
JPMorgan has built an extension to the Zether protocol, a fully decentralized, cryptographic protocol for confidential payments, compatible with ethereum and other smart contract platforms and designed to add a further layer of anonymity to transactions.
Zether, which was built by a group of academics and financial technology researchers including Dan Boneh from Stanford University, uses zero-knowledge proofs (ZKPs), a branch of mathematics which allows one party to prove knowledge of some secret value or information without conveying any detail about that secret.
While EY’s protocol code-named ‘Nightfall’, has been developed over the last year by the consulting firm’s team of over 200 blockchain developers.
From Coin Desk,
The protocol was created for such use cases as supply chains, food tracing, transactions between branches of a company and public finance. Like other enterprise blockchain platforms, Nightfall takes advantage of a technology called zero-knowledge proofs to allow private transactions on a shared ledger.
EY’s global innovation leader for blockchain, Paul Brody, explained at a press briefing,
“We want to maximize adoption and community involvement, we want people to adopt it, and adapt it, and improve it. If we retain ownership, people may not invest that much time and energy in something they might not control. The cleanest way to make everybody use it is just to give it away with no strings attached.”
To sum up: A lack of privacy and a lack of trust in networks is a huge problem today.
Blockchain, and Ethereum in particular, has just solved both of these problems.
See you next week,

Does blockchain hold the answer to the internet's biggest challenge?
Rate this article
Note: 3.9 of 5 votes