Gold, Bitcoin, hedgehog trading… What's it all about? 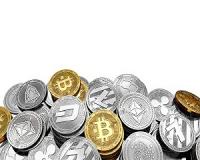 Gold, Bitcoin, hedgehog trading… What's it all about?
Rate this article
Note: 5 of 1 vote