Have we discovered the future of money? 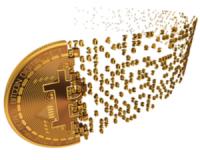 Did you know that the story of money is older than civilisation itself?

That's right. Money is an “innovation” that's older than the wheel and, as old as fire.

Originally when humans wanted to trade outside their tribe or villages, they needed something that everyone agreed had value. Something that was accessible.

There were many kinds of commodity money but each had to embody the same five characteristics:

In ancient Rome, it was salt.

In Fiji, it was whale tooth, shells in Africa and China. Even grains, metal, ivory, fish, stones - If it had the five characteristics, it was used as currency. The Bitcoin Lie
Don’t invest a penny in bitcoin – or any other cryptocurrencies – until you’ve claimed this FREE book.
Discover what could really happen to cryptos in the next 12 months and beyond…
Click here now to claim your FREE copy.
________________________________________
Civilisation needed a stable form of currency
Fast-forward to 600B.C…
The first “official” coin used as currency was minted in China and Turkey. These coins shared the five characteristics of commodity money and they were durable.
Coins became a universal currency that allowed people to trade goods across different regions.
But in 1,200A.D. – The Chinese moved away from coins to paper money.
Europe only caught onto paper money 400 years later.
Eventually, banks used paper money for depositors and borrowers to carry around instead of coins. These notes worked as IOUs and could be taken to the bank and exchanged for their face value in silver or gold coins. IOUs worked much like coins as they were used to trade goods across the world and recognised as a form of currency.
Banks and governments started buying paper currencies from each other and the first currency market was created.
But as time passed, innovation, new technology and of course the internet, transformed money and the way civilisation bought and sold goods with each other.
Just think about it, in over the last 100 years, we’ve seen the invention of the credit card, we’ve entered the digital world with mobile and online banking and contactless payments.
As of 2009, we advanced to “digital money”. Money that’s created, stored and exchanged on a network – for example, bitcoin and cryptocurrencies.
Recommended: Discover how to start pinching profits like R750, R430 and even R1.450 from the markets – here
So are digital currencies really a form of “Money”?
Many regulators don’t consider Bitcoin to be a currency and still have a long way to go and are struggling to understand this phenomenon.
But the blockchain technologies offer far more than currency, as they give us a way to decentralise human technologies, without the need for central authorities.
Even though the big central banks don’t agree that bitcoin or cryptocurrencies are “real” forms of money, there are so many possible uses for Bitcoin.
In fact, bitcoin and cryptocurrencies’ popularity has spread to a point where people and companies are doing business with it.
You can buy everything from flights to furniture using Bitcoin. From tipping to money transfer to micropayments and even used as a savings vehicle.
The point is, new ideas are being thought of all the time.
The future is bright for digital currencies.
Always remember, knowledge brings you wealth,

Joshua Benton, The South African Investor
P.S. You can make a fortune from the digital currency revolution. In fact, a tiny stake of just R1,000 can grow as high R500k. Discover how to invest in the digital revolution, right now.
Tags: joshua benton, bitcoin, cryptocurrency, digital currency,

Have we discovered the future of money?
Rate this article
Note: 4.8 of 5 votes