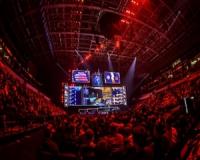 I remember, when I was younger, how PC gamers were the social pariahs.

How to expand your investment universe and tap into the online gaming mega-trend
Rate this article
Note: 4.5 of 2 votes