The beginning of Bitcoin's NEXT doubling?

by Joshua Benton, Editor, The South African Investor, 05 May 2021 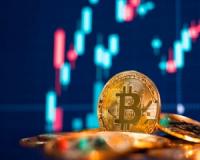 He mentioned something about a possible capital gains tax.

It scared some traders and investors with big, long positions in Bitcoin.

And of course, crypto tanked.

But this could actually be a tanking many crypto proponents have been waiting for…
________________________________________
Quick-Start Guide to Crypto + 3 Coins to Buy
If you haven't yet taken your first step in this surging market, there's never been a better time to do it. Because we have identified three particular cryptos that could rocket.
None of them are Bitcoin.
These are tiny, under-the-radar names. All three picks are priced UNDER $10.
But the profit potential is incredible. It's never been easier to take your shot at huge returns.
Check Out All Three Coins Here
________________________________________
Dips are usual after the Bitcoin “Halving”…
Bitcoin’s been on a tear over the past year.
It was just waiting for a sell-off catalyst.
But don’t fear, we’ve seen these types of dips in previous crypto bull runs.
Take a look… The following chart shows what happened the year after the last three bitcoin ‘halvings’ — in 2012, 2016 and 2020.
And right now, we seem right at that dip stage. Which, if going on the past two bull runs, could be followed by a dramatic explosion even higher.
It is this pattern that is causing analysts to predict we’ll see $100,000 Bitcoin by the end of 2021.
But there’s another pattern that could point towards a $100,000 Bitcoin this year.
Bitcoin 20th Doubling…
Earlier in April, we witnessed the 20th doubling in the price of bitcoin as it broke through $62,914.56 for the first time. Source: ByteTree.com
Has there ever been an asset that’s achieved this feat?
I don’t think so.
Today, the 18.6 million Bitcoins that are in circulation are worth just over R1 trillion.
Tech giants like Amazon, Microsoft and Apple are worth over a trillion, but haven’t the rate of growth like Bitcoin.
For instance, Microsoft has doubled 11 times since the IPO in 1986. Amazon and Apple have doubled ten times.
So Bitcoin is in a rare category indeed.
What you can take away from this is that each double helped spread the word. I mean, there is no better crowd-puller in finance than a rising price. We’ve seen it in other smaller cryptos and tech stocks.
This should be a good catalyst for Bitcoin to continue running higher.
What’s more, you may not realise that Bitcoin’s 20th double is a huge moment.
Why?
________________________________________
Not only is this one of the easiest ways to trade the markets, it’s so quick you could have ‘pick-pocketed’ your first profit in the short time it’s taken you to read this far!
As soon as I spot an opportunity, I’ll slide open my mobile and text you the details of a trade idea that will take no more than a couple of minutes to action. (I’ll show you how quick it is in a moment.)
Really, this isn’t one of those things that are quick if you’ve been doing it for years but takes ages if you’re just starting out...
By the second time you do this yourself, you’ll be able to react to my text in a matter of minutes, which is amazing really, when you consider in that brief time you could pickpocket a profit of R14,050, R6,250 or even R5,450...
________________________________________
Because it doubled on much lower volatility!
We all know Bitcoin, and cryptos, are notoriously volatile.  In fact, many critics say Bitcoin can’t be considered as a store of value yet, as the price swings are just too erratic.
And they have a good point. You can’t say that about gold.
But interestingly, the volatility of Bitcoin is slowly getting lower.
For example, the first 19 times Bitcoin doubled, the volatility – on average – was 157%.
The 20th time Bitcoin doubled, the volatility was only 55%.
Obviously, this is still very high compared to stocks and gold. Gold volatility is 14%, and the S&P 500 is 16%.
But the lower volatility in Bitcoin is exciting as it’s showing us the asset is becoming more mature.
High volatility is a sign of an asset’s immaturity and shows it is speculative.
In contrast, a less volatile asset provides a greater degree of comfort and certainty. Take bonds for example…
Institutional investors loves bonds, because they do exactly what they say they will do. Even though, they may yield absolutely nothing (even negative) in the US and Europe. Investors still flock to them because of their “safety”.
So we can argue that if Bitcoin wants to attract much more institutional capital, it needs to calm down (in terms of volatility).
There is still a long way to go before the mainstream institutional investor deems Bitcoin a must-have asset. But take comfort that recent events have brought that one step closer.
And it also means, maybe one day, Bitcoin will finally be accepted as a store of value – which would only make the asset even more attractive to own.
See you next week.
Joshua Benton,
Managing Editor, The South African Investor
Tags: joshua benton, investing, bitcoin, crypto,

The beginning of Bitcoin's NEXT doubling?
Rate this article
Note: 4.88 of 4 votes