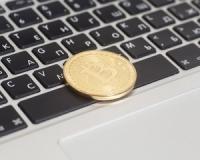 Right now, many investors are scrambling to find assets that don't follow the swings of the stock market.

Their first choice is gold.

You see, gold has constantly proved itself as a supreme store of value. If investors get scared by financial or political news, gold makes a great insurance policy.

It is almost certain to hold its value over time.

And obviously in times of turmoil, gold can vastly outperform most other investments.

But as of a few years ago, gold met its rival…

A digital rival called bitcoin, which has more in common with gold than most investors realise.

Here's what I mean…
Recommended:
________________________________________
“If you want to make a killing from cryptocurrencies – read this bookas FAST as you bloody can!”
I’d like to rush you a copy of my book, Crypto Revolution, right away.
Inside you will find everything you need to understand this financial revolution… And take maximum – potentially life-changing – advantage of it.
Including the name of the coin I am calling “The Bitcoin Killer”…
A cryptocurrency that could ultimately climb 20,000% from where it sits today.
That’s the kind of move that turns R2,500 into R500k over the longer term.
You’ll get the name of that crypto… my full case for why it could rise to become the #1 crypto in the world…
And my full analysis on the entire cryptocurrency landscape, all in my book.
________________________________________
Bitcoin and gold are all about scarcity
The main thing that gold and bitcoin have in common is their limited supply.
Gold is rare.
Throughout all of human history just over 190,000 tonnes has been mined. In fact, you could fit all this gold into four Olympic swimming pools.
There is also a finite supply of it.
Bitcoin on the other hand, is also “mined”, but not in the same way.
Miners use computers to solve complex mathematical problems and are rewarded for doing so in bitcoin.  When a new block is added to the blockchain, new bitcoin is created, and one of the miners gets to keep it.
Every four years the amount of bitcoin that is created per block is halved, which means that by around 2040 there will be no more bitcoin left to mine. The total supply of 21 million will have been reached.
When you factor this in, bitcoin is arguably even rarer than gold. More than 80% of bitcoin that will ever exist has already been mined. And much of that supply has already been lost.
In fact, it’s estimated that more than 4 million Bitcoin have been lost and more than 2 million stolen. So, the estimated spendable supply will likely never exceed 15.5 million.
Bitcoin and gold as investment ‘safe havens’
As I said, investors are increasingly looking for assets that don’t follow the swings of the stock market. These kinds of assets are known as uncorrelated assets or “safe havens”.
Over the course of history, gold has proven itself to be a great safe haven when stock markets get rough. Just consider Trump’s escalation of tariffs over the past month has seen gold rise from $1,276 to around $1,408 today.
So, could Bitcoin work just as well?
Founder of Morgan Creek Capital Management, Mark Yusko believes bitcoin could be the ultimate uncorrelated asset. At Paris Blockchain Week in April, he discussed how bitcoin has remained an uncorrelated asset in both bull and bear markets,
And in a recent interview, he said: “bitcoin is a great diversifying asset, it has very low correlation and it should be in everybody’s portfolio.”
So, if there’s ever been an asset that can give the precious metal a real run for its value, it would be Bitcoin. It has potential to become the global currency for the internet, and most crypto investors expect it to be eventually worth upwards of $100,000 to millions of dollars per coin.
Should those prices ever be achieved, Bitcoin could earn the right to the title “digital” version of the gold.
However, gold is not just going to disappear. It’s already proved itself as a “safe haven” over the course of more than 2,000 years.
________________________________________
Must see:
A straight up offer from one of South Africa's top financial analysts and small cap experts, Francois Joubert:
"Let Me Pinpoint the Fast Moving SA Small Caps that Could Make You 100% or More...
And share everything you need to potentially profit from them directly with you each week"
________________________________________
One thing is for sure, both assets offer great profit-opportunities right now
In my view, both assets deserve a place in your portfolio. And I’m not the only who thinks so.
Recently, my colleague Francois Joubert uncovered the perfect way to profit from gold’s great run in 2019. You can learn more about how here.
And my colleague Sam Volkering has just released his 2019 edition of his e-book Crypto Revolution in which he reveals his #1 Crypto-play that he believes could rise as much as 20,000%
See you next week,

The ‘Bitcoin-Gold' connection
Rate this article
Note: 3.7 of 5 votes