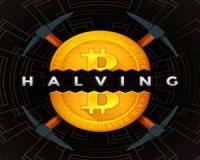 I'm talking about the “Bitcoin Halving”.

You might be familiar with this massive event…But simply, “Halvings” have been a boon for bitcoin investors in previous years.

The next halving is scheduled for May 2020...So with that mind, today I'm going to explain what the halving is and why it's important for the crypto ecosystem…
________________________________________
This has to be one of the best investments right now!
• NO Tax on interest earned
• NO Tax on dividends
• NO Tax on income
• NO Capital Gains Tax
Learn more here…
________________________________________
The Bitcoin “Halving” explained…
The bitcoin halving is an event where the reward for mining new blocks is halved, meaning miners receive 50% fewer bitcoins for verifying transactions.
Bitcoin halvings are scheduled to occur once every 210,000 blocks – roughly every four years – until the maximum supply of 21 million bitcoins has been generated by the network.
That means…
Every 10 minutes, a “block” of bitcoin transactions is solved by miners and added to the bitcoin blockchain.
This is complicated and expensive work and demands a lot of electricity and specialised hardware.
So why would anyone do this?
Because the algorithm rewards miners with new bitcoins, which are generated and added to the circulating supply every 10 minutes. This distribution of new BTC is known as the “block reward.”
When bitcoin first appeared, the block reward was 50 BTC. This means that every 10 minutes, somebody, somewhere, was getting 50 bitcoins delivered to their wallet. This was back in the days when BTC was worth peanuts and you could mine it using only a laptop.
Then, on 28 November 2012, the first bitcoin halving event took place. The block reward for miners was cut in half i.e “halving’, from 50 BTC to 25 BTC.
Then on 9 July 2016 was the second halving. This meant the block reward for miners was cut in half again, from 25 BTC to 12.5 BTC.
The next halving will occur in May 2020, where the reward for miners will be reduced to 6.25 BTC.
Why Halvings are vital for the crypto ecosystem
Halving plays a crucial role in the economic model of bitcoin and similar Proof-of-Work altcoins.
The creator of Ethereum, Vitalik Buterin explained this idea by comparing bitcoin with gold:
“Gold reserves in the world are limited, and with each gram mined, it becomes more and more difficult to get the remaining unmined gold. As a result of such a limited supply, gold has retained the value of an international medium of exchange and store-of-value for more than six thousand years, and there is hope that Bitcoin will do the same”.
So in theory, halving helps curb hyperinflation and makes Bitcoin a scarcer asset, which should have a positive effect on its value in the future.
Another important point is supply and demand can play an important role for price increases.
If fewer bitcoins are being generated, the newly increased scarcity automatically makes them more valuable.
So how have past Halvings influenced bitcoin’s price?
The chart below shows you how bitcoin’s price reacted after both halvings. The red arrows in the chart show the massive surge in the bitcoin price after the halvings.
• The first halving saw bitcoin soar over 7,000% in the 12 months following the event.
• The second saw bitcoin rise around 300% in the 12 months following the event
It’s important to note that with each halving, there were different variables at work.
With the first, it was the first time a halving ever happened, and no one had any real idea what to expect.
The second time, the rise of Ethereum and initial coin offerings was a new factor that was not happening in 2012.
Today, the biggest changes in the crypto market is the higher public awareness around bitcoin and the interest of institutional investors.
In fact, institutional investors are already jumping in the crypto with the launch of future and options markets (like Bakkt – a crypto futures exchange).
If financial institutions begin taking big positions, it could affect bitcoin in ways investors have never seen before.
________________________________________ The most anticipated event in the crypto world in 2020 is coming next month…
Rate this article
Note: 3.93 of 23 votes