The next wave of wireless tech is here! And it could revolutionise almost every industry around the world Here's your best chance to profit 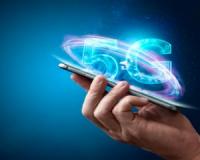 Probably not, and yet this device is barely a decade old.

Smartphones have been adopted faster than any technology that's come before it.

In just six years one out of 2 Americans had adopted smartphones. Compared to radio's eight years, VCR's nine years or the internet's 11 years.

A decade or so later, the first widely used cellular networks debuted. These first-generation — or 1G — networks allowed the first widespread use of cellphones.

By the early 1990s, digital, or 2G, cell service became available. These networks allowed for more than just voice. With 2G, users could text.

But we wanted more. And by the early 2000s, telecommunications companies began rolling 3G wireless connectivity out. The improved connectivity allowed us to do more than just text… we could now go online.

It started with BlackBerry phones, and by the late 2000s, the smartphone became abundant with the revolutionary iPhone and other models that followed.

Today, 4G wireless is the standard. If you have a speedy wireless connection on your smartphone, it's thanks to the newer standards and technology.

________________________________________
5G: The 21st century tech revolution set to catapult into a $12.3 trillion industry!
Imagine connecting more than 100 times faster than your current 4G connection… and more than 10 times faster than your home broadband.
Wireless speeds so fast you can download a high-definition movie in a second.
That’s the power of 5G.
With 5G, tech innovations like virtual reality (VR) and electric cars, are now a reality.
But they’re just two applications of the 5G demand puzzle. There will also be a growth of new data-hungry devices.
Growth of the internet of things (IoT) means data use will grow exponentially. As many as a trillion devices will connect over the next 10 years.
5G will lead to new tech we haven’t even dreamed up yet. Take 4G, it enabled billion-dollar “unicorn” start-ups to emerge like Uber, Facebook and the whole ‘app’ economy.
According to former Federal Communications Commission Commissioner Rob McDowell,
“No one foresaw the app economy coming. What’s exciting about 5G is that nobody can really fathom what’s going to happen.”
US chip maker, Qualcomm (NASDAQ: QCOM) believes,
• 5G will lift mobile into a technology that changes the world.
• …the global 5G standard will advance mobile from connecting people-to-people and people-to-information to a unified connectivity – connecting people to everything.
The company projects that $12.3 trillion in new goods and services will be enabled by 5G technology by 2035, creating 22 million jobs and growing the world economy by $3 trillion!
Phone company, Ericsson says the new 5G market will be worth more than $1.2 trillion by 2026.
And the Global System Mobile (GSM) Association predicts over a billion 5G connections by 2025, reaching a third of the global population.
The move from 4G to 5G is going to be like moving from the typewriter to the computer.
In other words, it will involve new ways of thinking and new industries to support new ways of doing things.
If you want to get in early and profit from this tech fuelled boom, then read my latest briefing here.
See you next week.
Joshua Benton,
Managing Editor, The South African Investor
P.S: I reveal my top 5 plays set to benefit from the 5G revolution right here.
Tags: joshua benton, 5g, investing, technology, 4g, qualcomm, qcom, tech revolution

The next wave of wireless tech is here! And it could revolutionise almost every industry around the world Here's your best chance to profit
Rate this article
Note: 4 of 2 votes