The world's most powerful people are buying crypto - So should you! 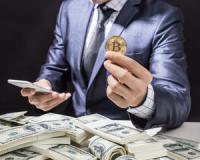 The world's richest and most powerful are buying crypto.

________________________________________
Bye bye Eskom
There is only one way to profit from Eskom’s Coal Cliff – and SA’s energy revolution and that is to invest in these Three Penny Stock Eruptors:
Read it and you will discover:
Penny Stock Eruptor #1:
A coal miner that's set to quadruple production and come to Eskom's rescue
Penny Stock Eruptor #2:
The only such business in Africa, with the technology to turn refuse into electricity
Penny Stock Eruptor #3:
A South African company that builds and manages renewable energy plants
This report is yours today.
________________________________________
These families are the definition of wealth and they’re stocking up on crypto
I’m talking about the Rockefeller and Rothschild families.
You see, in April 2018, news surfaced that the Rockefeller family started investing in crypto.
Finance Magnates reported:
The Rockefeller family is joining the party.
Specifically, the venture capital arm of the Rockefeller Foundation, Venrock, has signed a partnership with Coinfund, a Brooklyn-based cryptocurrency investment fund.
David Pakman, partner at Venrock, told Fortune: “We wanted to partner with this team that has been making investments and actually helping to architect a number of different crypto economies and crypto token-based projects.”
The Rothschilds have been quietly buying crypto since 2017
Last year an article in EconoTimes commented:
Rothschild Investment Corporation, one of Chicago’s oldest employee owned investment manager, has invested in digital currency bitcoin via Bitcoin Investment Trust (GBTC), according to the documents sent to the Securities and Exchange Commission (SEC).
According to the details provided, Rothschild Investment Corporation has acquired shares of Bitcoin Investment Trust (GBTC) for $210,000.
The interesting thing is, people with this much power, money and influence don’t usually make their investment business public.
So, the question is, why have both the Rockefellers and Rothschilds let the world know they are buying into crypto?
________________________________________
The multiple payday secret
What if you could add two, three or four extra paydays to your diary every month?
And what if you could do it with just a few clicks of your mouse?
That’s exactly what this secret approach to the markets lets you do.
We call it the ‘multiple payday secret’ and today you can discover how it works and put it to the test without risking a single cent.
Just see how it works, get comfortable, and then make a call as to whether it’s right for you.
Click here now to get the full details.
________________________________________
A game-changing event for crypto is on the horizon
Maybe the reason why these elite families are buying crypto has something to do with the progress of bitcoin’s Lightning Network.
In March 2018, Coindesk reported:
A version of bitcoin’s much-anticipated Lightning Network is finally ready for real users. Announced today, California startup Lightning Labs has officially launched a beta version of its software (LND), making available what investors and project leads say is the first thoroughly tested version of the tech to date. This means that users can now leverage LND to send bitcoin and litecoin to other users, all without settling those transactions on the blockchain.
While this software is one of several seeking to form a combined network that aims to make cryptocurrency transactions faster and cheaper, today’s development effectively takes bitcoin a step closer to new kinds of applications, such as Internet of Things payments and recurring billing.
This progress on bitcoin’s Lightning Network is one possible explanation, but there’s something even bigger coming.
Soon, Ethereum releases Plasma, which will enable millions, or even billions, of transactions per second.
Increasing the “transactions per second” of a blockchain may not sound all that important. But it’s one of the main hurdles to “mainstream adoption” as people like to say.
Just consider this…
Visa processes around 2,000 transactions per second on average, whereas bitcoin is around 8. But bitcoin’s Lightning Network will vastly increase that.  As for Ethereum’s Plasma network, it will allow millions of transactions per second, easily beating Visa’s 56,000.
Whether blockchain is being used for payments, computing or storage, the ability to process millions of transactions per second will be game-changing.
Both bitcoin and Ethereum are working on this transactions-per-second problem right now, and they are both very close to solving it.
Perhaps these elite families are just seeing the writing on the wall. Perhaps it’s time you do too. So if you don’t own any crypto, maybe it’s time you should.
See you next week.

Joshua Benton,
The South African Investor
P.S: Don’t know what crypto to buy? Check out “Crypto King” Sam Volkering’s #1 crypto play for 2018 that could make you over 14,300%.

The world's most powerful people are buying crypto - So should you!
Rate this article
Note: 4.8 of 5 votes