This crypto still has at least 5x upside from today! 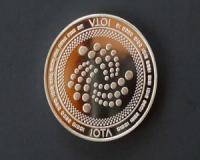 One of my favourite crypto projects is booming in 2020.

Its market cap has soared from around $444 million to over R815 million.

And recently it reached an important milestone in its development, which could see some more very big gains in store for investors.

Let me explain…
________________________________________
URGENT:
5 Must-Watch Stocks for the 5G Boom
You’re about to discover…
• Why 5G is one of the most important developments in human history
• 5 things you must know if you want a chance to get rich with 5G
• 5 companies that could play a crucial role in the 5G boom
You can dive into the details here.
________________________________________
IOTA completed its first major step forward to greatness
On 19 August, the first phase of its upgrade to IOTA 1.5 took place.
This step, also known as Chrysalis, is a key step towards IOTA’s Coordicide full release.
The Chrysalis upgrade was deployed and there’s some key aspects that continue my conviction of the huge potential IOTA has.
#1: IOTA’s network can now support 1,000 TPS
The most important improvement is the increased scalability of IOTA. With Chrysalis phase 1, IOTA is able to process more than 1.000 transactions per second (TPS) compared to 20 in the previous version – That’s 50x faster!
From IOTA,
Up until now, the network was only able to consistently handle Transactions per Second (TPS) in the 5 to 20 range. Nodes, especially those running older node software, would start to struggle above 40 TPS. With the whole network upgraded to Hornet nodes, improved tip selection and milestone selection algorithms, and the addition of white flag, the network is now able to support over 1000 TPS.
That’s a massive step forward, and it goes on to say on the testnet it’s actually been able to see 1,500 TPS, which shows there’s much more scope as well.
To put IOTA’s current 1,000 TPS into perspective…
• Bitcoin manages around 3.5 TPS
• Ethereum can support 15 TPS in its current state
#2: Improved confirmation rates!
The Chrysalis upgrade also allows for improved online confirmation rates. This will significantly improve user’s experience of sending tokens from one wallet to another.
IOTA announced that the average confirmation time of transactions on the mainnet should now be at least 8 times faster than before.
With milestones being issued every 10 seconds, instead of around 80 seconds, tokens should now go from one wallet to another in a matter of seconds rather than minutes.
In addition, sent tokens will not require promotion or reconnection.
#3: Improved security and reliability
Chrysalis will also bring improvements to the security and reliability of the IOTA network. For example, there will no longer be a risk of the network being affected by a spam conflict.
In short, all signs are that Chrysalis has been a success, and the second stage of Chrysalis to come later this year will improve everything further.
________________________________________
Get ready for the next revolution in Crypto!
“If you want to cash in on the next crypto boom – read this report as fast as you can!”
To make it impossible for you to miss out:
1. It’s FREE
2. Read on to claim your copy now!
________________________________________
“Phase 2 is well on track” – IOTA Foundation’s Chief Engineer
Phase will bring changes to every piece of the IOTA software, and will result in the support of a new signing scheme and with it reusable addresses, new client library API, a brand new wallet for both desktop and mobile and more.
For example, reusable addresses will make IOTA much easier to use for everyone.
One of the main criticisms levelled at IOTA is the fact you have to use a new address every time you make a transaction. So, this will be a very welcome upgrade.
Given the possibilities and potential of IOTA’s upgrade, the coin should easily be in the top 10 cryptos by market cap. And unless something major happens I expect we could see its price rise in the future. At today’s depressed market size, a top five position would mean over 5x price rise for IOTA.
And in the best case scenario, if IOTA hit its 2018 high again, it would mean over 1,000% gains from today’s price.
That’s why IOTA is one of my top cryptos to buy right now.
See you next week.
Joshua Benton,
Managing Editor, The South African Investor
P.S. Grab my recently updated crypto report with TWO BRAND NEW “Crypto Kings” to buy right now.
Tags: joshua benton, investing, iota, crypto, chrysalis, bitcoin, ethereum

This crypto still has at least 5x upside from today!
Rate this article
Note: 4 of 3 votes