by Joshua Benton, Editor, The South African Investor, 11 May 2020 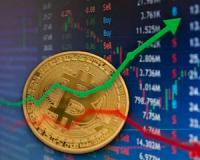 With so much news flooding our screens, you may have missed Bitcoin's incredible rally to $10k last week.

And if you took a punt earlier this year, you'd be smiling right now.

So will this rally continue?

Well that's the question I'm going answer today…
________________________________________
Prediction: These two digital currencies will lead the crypto resurgence
________________________________________
Beware of a Bitcoin pullback in the short term
Last week, market intelligence firm Glassnode tweeted that more than 80% of the current bitcoin supply is profitable and significant increases to BTC's price in anticipation of the halving could trigger investors to bank gains in the short term.
This means, a post-halving drop looks quite possible.
Why?
Firstly, retail participation has gone up over the past few months. The number of addresses holding at least 0.1 BTC began increasing exponentially from February and recently rose to a record high of 3,014,888.
The address growth continued even while bitcoin’s prices slid from $10,000 to the $3,867 seen in the first half of March. Put simply, some investors who acquired coins at below $5,000 are now sitting on more than 100% returns
At the same time, the participation from large traders, popularly known as whales, and macro traders and institutions has gone.
Open interest, or open positions, in bitcoin futures listed on the Chicago Mercantile Exchange (CME) jumped to a record high of $489 million last Thursday. The CME open interest is widely considered as a proxy for macro traders or institutions.
So with the majority of Bitcoin addresses already in profit, some crypto analysts expect investors/traders to start selling and banking some profits following “The Halving” on May 12.
Ed Hindi, CIO of Tyr Capital Arbitrage SP, which focuses on liquidity provision and arbitrage within the cryptocurrency markets recently said,
“We anticipate a number of investors will take advantage of rising prices ahead and into the halving to realize gains in the short term."
In fact, this could already be happening. As I write this, Bitcoin has already fallen back to around $8,600.
While the cryptocurrency could come under pressure after halving, analysts are confident the dip would be short-lived.
The long-term case for owning cryptos still remain intact
This is because the current macro environment may likely bolster bitcoin’s appeal as a hedge against inflation (and deflation). Something I’ve spoken about regularly on MoneyMorning.
But in short…
Not only is bitcoin’s pace of supply expansion scheduled to drop by 50% tomorrow, the supply cut is happening at a time when the major central banks are pumping unprecedented amounts of liquidity into the system to counter the negative impact of the coronavirus outbreak on the economy.
As one crypto analyst put it…
“If inflation reigns going forward, bitcoin will go off the dial.”
What’s more, historical data also supports the argument that a post-halving dip would be short-lived.
For example, in the four weeks following Bitcoin’s second halving, which took place on July 9, 2016, Bitcoin fell by nearly 30%.
However, in the following months, the cryptocurrency steadily gained altitude and rose to fresh record highs above $1,160 in March 2017.
________________________________________
Wow! Pickpocket Trader is picking winners weekly…
Another strategy that is doubling returns left and right
Trader X’s strategy for picking winners is coining it right now.  Seven straight winners in a row since February! He’s revealing the secrets behind these fast-moving plays in this special presentation which you can preview here.
________________________________________
So what can you learn from this today?
If you’re a crypto fanatic and believe they will be around the future, then the best strategy to take in these times is….buy the dip!
By doing this, not only will your average buying costs come down, you’re also likely to increase the gains you make.
See you next week.

What to expect from the Bitcoin price in the short and long-term
Rate this article
Note: 3.45 of 10 votes