The ‘Ultimate Paycheque' for a rich retirement 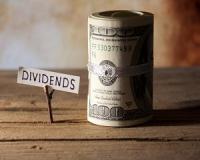 Or investing the same amount and getting back nearly R200,000 just in dividends…

I'd call that the ‘Ultimate Paycheque' retirement.

And as I said, I've identified six such stocks that could net you hundreds of thousands of rands in dividends alone but before I reveal them, let me show you how to identify them!
Recommended:
________________________________________
Your ONCE-IN-A LIFETIME chance to discover how to generate
A stream of Retirement Income that never runs out!

They don’t have to be the highest dividend yields.
But they must have paid dividends every single year for at least the last 10.
And most important they pay whether the market falls or rises.
A great example is AECI (JSE: AFE).  In its entire history, AECI has paid dividends 170 times!
Since 2000, this company grew dividends every year, except one – 2009.
A R100,000 investment back in 2000 would’ve netted you R264,217 in dividends.
If you include its share price growth since 2000, you would’ve made over a million rand investing in this one share!
No-one said making money was easy, so yes, these are long term investments – but that’s why I’m going to tell you about six paycheque opportunities you can get into today. The sooner you start, the sooner you’ll profit.
Paycheque Factor #2: They generate tons of cash and use it to reward shareholders
You’ve probably heard the phrase, “cash is king”.
Well, it’s true when it comes to paying dividends. You see, you don’t want to invest in a company that uses debt to pay shareholders dividends. Otherwise, the company keeps piling on debt over the years until it becomes uncontrollable and the company can’t pay it off.
There have been many companies that have collapsed due to unsustainable debt. And at the end of the day, it’s shareholders who end up losing a fortune.
That’s why you want to look for companies that not only generate tons of cash every year, but use that cash to reward shareholders.
For example, over the past five years, stalwart retail company Clicks, has generated over R8.7 billion in cash from its operations.
In 2018 alone, cash increased by 20.7% to R2.5 billion. Thanks to this, Clicks paid over R800 million to shareholders in dividends.
Recommended:
________________________________________
Just released: How these six ‘extreme wealth explosion’ stocks can make you thousands instantly
________________________________________
Paycheque Factor #3:  The key to long-term pay-outs is the right diversification
This kind of company isn’t just diversified across regions. It should ideally own multiple businesses across different sectors.
This allows them to generate profits in hard currencies as well as from multiple sources.
So, if one business fails to grow, the others will compensate for the loss.
Take self-storage company, Stor-Age for example…
After sealing its place as the #1 storage company in South Africa, Stor-Age ventured into one of the largest self-storage markets… The UK.
The UK has 47% of all self-storage space across Europe. And the demand for this flexible space is soaring. According to the Self-Storage Association, UK residents are renting four times more space per person than those in France. And 10 times more than in Germany.
This is exactly why Stor-Age acquired three UK self-storage developments. What’s more, the rental per month in the UK is much higher than in South Africa. Stor-Age will generate around 4 times more income.
This expansion into the UK automatically makes Stor-Age less dependent on the South African economy, gives it a rand-hedge and helps it generate tons more income.
So the fact is, this kind of mega income share has the ability to generate you a large, but safe and steady stream of income for a lifetime.
And, that’s why I created Retire Rich with Dividends -  a special report revealing six companies that could be your ultimate paycheque. For a limited time, I’m making it available as a free download.  You can find out how to claim your copy here.
See you next week,

Josh Benton,
Managing Editor, Real Wealth
P.S. In my free report, Retire Rich with Dividends, I reveal details on a company that boasts more than a 30-year track record of paying dividends. Investors have made over R1.6 million in dividends alone on a R10k investment and I expect you could do the same.
Tags: joshua benton, dividends, cash, diversification, paycheque

The ‘Ultimate Paycheque' for a rich retirement
Rate this article
Note: 3.5 of 14 votes