Finally, the rand finds a stable footing thanks to the South African Reserve Bank 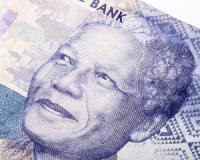 The past few weeks have been harrowing for the rand.

It's been taking a severe beating from the dollar in the past two weeks.

Worst of all, rumours about the arrest of Pravin Gordhan has certainly not been helping matters at all. But, finally, it seems to have found a moment of stability. How long this will last, I don't know.

But let's take a closer look...

The rand is battered by the dollar, bullied by South Africa


The South African Reserve Bank has decided to leave the lending rate unchanged at 7%. Our central bank is struggling to find a balance between high inflation and low growth.

Fin24 reports that Nedbank Capital analysts Mohammed Nalla and Reezwana Sumad said, “minutes of the Federal Reserve's April meeting released overnight were very hawkish and expectations of a US rate hike in June appears to be back on the table, which in turn has favoured the dollar,"

The poor rand is like a weak little child on a school playground. South African policies are luring him into a fight he is certainly going to lose with malicious arrest rumours, violent parliamentary sessions and poor economic decisions.

The dollar on the other hand is standing in the corridors just waiting to beat him into a pulp.


If this year has taught us anything, it’s not to place any faith in government decision makers. Before the end of this month, I expect our president, some dodgy parliamentarian or the national prosecuting authority to do something that will put our currency on the back foot again.

Call it what you will, a gut feeling maybe, but this isn’t the end of the rands struggle to strengthen against the dollar. I hope I am wrong.

If you’d like to find out what you need to do with your investment in the face of this uncertainty join us at the South Africa Investor Member meeting next week.

At this exclusive member meeting we’ll show you:

If you’ve been to a South African Investor member meeting before, you know how important this is.

Finally, the rand finds a stable footing thanks to the South African Reserve Bank
Rate this article
Note: 5 of 1 vote