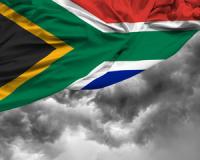 The International Monetary Fund reports that South Africa is now Africa's third largest economy. Egypt has knocked us off our second place position.

South Africa has barely managed to deal with the blow when it lost first place to Nigeria two years ago, not it has to deal with yet another demotion.

KPMG's chief economist, Lullu Krugel says, “Psychologically, I do think this is a blow. We've always thought of ourselves as the powerhouse of Africa, and then we're number two and now we're pushed to number three.”
We’re losing all hope of returning to first place

The weaker rand, ailing economy and mismanaged funds are major contributors to the countries fall from power. As long as the government continues to make brash decisions without proper consultation, South Africa will struggle to recover its losses.

We’re losing to nations marred by political and terrorist violence

Look at the timeline of Egypt’s political problems since 2014 taken from the BBC.com

Despite all the political unrest and increased violence, the Egyptians managed to beat South Africa. I’d personally like to hear how our president plans to justify this economic blow.
Tags: egypt, south africa, economy, currency

South Africa's economy loses yet again - This time to a political unstable counterpart
Rate this article
Note: 5 of 1 vote