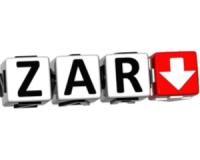 It's with great sadness I announce the demise of the rand!

Of course, you are probably thinking… So what? Same old and why the drama?

Well, it's what I saw in my charts this morning that made me lose all hope for the future of the rand.

In fact, if this plays out we could see the end of the South African Rand.

Let me explain…
Read: Do Triple Digit Gains Sound Good? Learn the Secret of Trading for Huge Profits – Whether the Market goes UP or DOWN!
This three year pattern could spell the end of the rand At the beginning of 2018, the rand was as low as R11.50 to the US dollar.
Blink and today it will cost you R13.32 to buy just one US dollar.
R2 doesn’t sound like much, but that’s a 19.13% move in just six months!
This is a huge move, especially for a currency. And this is just the beginning…
In the weekly South African rand chart, there is a dangerous pattern that’s been forming for the last three years.
It’s known as the falling wedge pattern.
Between the blue lines in the chart, this wedge formation has formed.
This technical pattern forms when a market consolidates and moves in a sideways manner over a certain period of time.
Once the market price breaks above the wedge pattern, panic, fear and anxiety will kick in.
Investors will flee from the rand, sell their positions and start buying into the US dollar.
The rand will weaken to the top of the wedge pattern. This is generally the first target of a falling wedge pattern.
Before you know it, the rand will be at R16.98 to one US Dollar.
That’s another 23% downside we can expect next.
Once the rand hits this level, it’ll most likely stay there.
The question we now need to ask ourselves is.
**********Advertisement**********
It’s ambitious. But it just might work…
Three ‘Rocket Stocks’
that could make you
up to 726%
Don’t Wait! Click here to find out more
And these three stocks could be your ticket to this potential profit explosion:

Find all the details right here
******************************
How do we profit from the impending weak rand?
There are plenty of rand hedge trades we can take advantage of while the rand weakens.
Either you can buy the USD/ZAR CFD and ride the market up to R16.98 for a hefty profit.
Or you could buy into resources as a weakening rand pushes resource share prices up.
I have a number of trades lining up with Red Hot Storm Trader as I prepare for the end of the South African rand as we know it.
Always remember, “Wisdom yields Wealth”