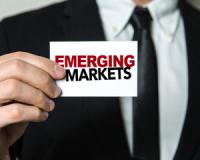 The International Monetary Fund has increased its global growth forecast to 3.9% for 2018 on the back of US Tax cuts that will most likely stimulate growth.

Typically, global growth above 3.5% is a strong catalyst for commodity price growth and emerging markets.

SA is still in a honeymoon phase after Ramaphosa's election. The Rand strength and other positive economic results have raised the prospect of interest rate cuts later in the year. But inflation is likely to remain constrained in 2018. BANG!: Read this now if you have any money in the stock market!
One to Buy
Speculation and backlash have made this stock a buy below R260
Last year we called a sell/short on Aspen at R310 and now below R260 its offering exceptional upside potential and could easily go back to that level.
Aspen has been received a backlash after being identified as the potential target of another Viceroy Research report. The company’s shares have fallen 20%, but it’s just speculation…
Stephen Saad, the CEO has publicly appeared to address the rumours and speculation. He has addressed the major concerns to our satisfaction and stands by their business model and published financials.
It’s currently on a PE of 19.58 times and earnings are expected to increase around 20% in their results to 31 December, to be released in early March. In our view it is likely the share will move above R300 in the next 4 months offering up a return of 25% for those who dare.
Buy Aspen below R260.
Long Term Ideas
• Sygnia: Still up 8% after pull back. Hold
• PPC: Up 23%. Hold
• Santova:  Buy below R3.00.
• Merafe: Accumulate below R1.55.
• Jubilee: Strong support at 60c. Hold.
• MTN: 13% in the money, still bullish above R130. Hold
• Glencore: Bouncing from R60. Hold
• Wescoal: Long term buy. Add below R1.80
• Naspers: Up over 50%, overweight positions should be adjusted. Hold