“My JSE's Top 40 big prediction revealed thanks to this triangle” 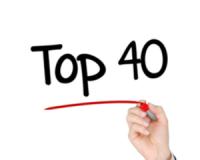 “In the last Red Hot Storm Trader webinar, you mentioned the JSE ALSI Top 40 Index is showing promising upside which will drive up stocks.

However, you didn't indicate how far up it will go. What is your prediction on where you expect the JSE Top 40 to go next?”
In the below chart, you’ll see that the JSE Top 40 has broken above the wedge (triangle) pattern.

**********Advertisement**********
It couldn't be easier for ordinary people like you to start making money on the FIFA World Cup Soccer 2018
If you love soccer and like the idea of winning big amounts to small stakes, then you're going love this!
Every Friday evening I’ll be sending my readers simple, step-by-step instructions on what bets to place to reap the rewards.
If you don’t want to miss anymore winners click here now.
******************************
To find the target of this triangle pattern, you’ll just look for the highest point of the triangle.
In this case, the highest point is drawn with a horizontal green line at 55,000.
That’s where my next JSE Top 40 target will be, all thanks to a triangle.
And we know the JSE Top 40 is made up of the Top 40 shares by market cap. This means, there are a number of trades lining up as we speak.
“What is the minimum amount you can start trading with if I want to trade CFDs?”
I’d suggest you start out with R10,000 to trade so you’ll have enough money to play around with local CFDs.
This way you can get the feel of what it’s like to trade with real money and you’ll have enough to cover costs
**********Advertisement**********
How to generate a R700,000 windfall starting with R10,000 using the oldest wealth trick in the world
This wealth secret is the most powerful force in finance. It’s the force behind almost every fortune. The brilliant financial writer of the Dow Theory Letters, Richard Russell, called it “The Royal Road to Riches.” And it’s been mathematically proven time and time again as the #1 ’how to get rich quick’ trick in the modern world.
Even Einstein joked that it is “the most powerful force in the universe.”
And in my brand new book, The Little Book of Big Income – 7 Filthy Secrets to Get Rich Quick, I’ll show you how to use it to turn R10,000 into more than R700,000 on page 11.
But you must act fast…
My publisher is only allowing me to give away 300 hundred copies as a special launch offer,
Claim your free copy of Little Book of Big Income here
******************************
"You spoke about the Average True Range indicator and how you can use it to help set up a trade. My question is more of a technical one. What is the difference between the “range” and the “true range” of a share?"
During the day you’ll see the stocks trading at different prices.
Everyday there is a low price where the stock trades the lowest of the day.
And a high price where the stock trades the highest for the day.
The ‘range’ of a stock is simply calculating the difference between the high and the low price of the stock for that day.
Let’s say Anglo American share price moved between a low price of R280 and a high of R290. We say that Anglo moved in a R10 range that day.
Here’s an example using one day’s range of Anglo…

Here are what the price bars will look like.

The True Range will simply find the highest value of the three options of the day, to make up for the gaps.
Now in this week’s article, we used a 14-Day Average True Range.
The indicator will simply add the highest value of the three points, over the past 14 days and divide it by 14 days to get the Average True Range.
Luckily you won’t have to do any of these calculations, as you have a charting platform to do them all for you.
Always remember, “Wisdom yields Wealth” “My JSE's Top 40 big prediction revealed thanks to this triangle”
Rate this article
Note: 4.67 of 3 votes