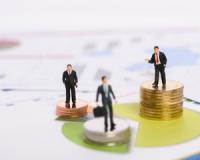 In the past six months, a little known JSE listed company, Insimbi, is up nearly 50%.

Growing profits by as much as 142% in an economy that's in recession is nearly impossible.

But Insimbi achieved this - how you ask?

Well, the company made a smart acquisition at the end of 2016.

It bought another business, AMR Group, using a combination of cash, shares and debt.

At the end of 2016 I explained the deal to Red Hot Penny Shares readers as follows:
Recommended: Don’t invest a penny in bitcoin – or any other cryptocurrencies – until you’ve claimed this FREE book.
What the AMR Group deal did for Insimbi In short – the profits added by the business Insimbi acquired was more than the interest it pays on the loans to buy it, by a wide margin.
And the company used enough cash in the deal to avoid diluting shareholders.
This means that earnings per share would increase – and the share price would follow.
Discover: How to turn R10,000 into R87,400 using my proven strategy
Three tips to spotting acquisitions that will send a share price soaring
What you need to watch out for is that not all acquisitions send share prices up.
They sometimes send them down as well…
Fortunately, this isn’t down to guesswork.
If we can calculate the after deal earnings per share, we’ll know if the share price will head up or down with reasonable certainty.
But without doing that, there’s a couple of rules of thumb you can use to identify good acquisitions:
I hope this gives you a better idea of how acquisitions can aid in share price growth – and how to spot good acquisitions from the bad ones.
I have uncovered two penny shares with massive deals in the pipeline this month.
These deals could put their gains on 50% - 100% within the next one to two years.
To find out more about these two companies check out my October issue of Red Hot Penny Shares right now!
Here’s to unleashing real value

One way to find growth in shares when the market's going nowhere
Rate this article
Note: 2.5 of 2 votes