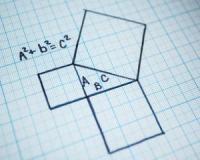 In a right-angled triangle, the square of the hypotenuse equals
the sum of the squares of the other two sides

But he was profoundly influential in the writings and thinking of future philosophers such as Aristotle and Plato and in particular, George William James (born October 5, 1949 an American baseball writer, historian, and statistician).

James has written more than two dozen books devoted to baseball history and statistics. His approach scientifically analyses and studies baseball, often through the use of statistical data, in an attempt to determine why teams win and lose.

And in 2006, Time named him in the Time 100 as one of the most influential people in the world. For a bad team, the graph will look like this:

For a good team, the graph will look like this: These visual aids, greatly help and add to your sports betting strategy.
Incorporate the Pythagorean Expectation into your strategy, and reap the benefits for years to come.
Until next time,

What is Pythagorean Expectation and how can it help with your next soccer bet
Rate this article
Note: 4.5 of 2 votes