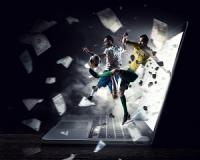 When we bet, we usually bet intuitively.

Meaning we rely on what we know and feel about a particular team or player and make an on-the-spot judgment of the chances of success.

While Intuition is great at instantly assessing if someone is upset or angry at you, it's not great when assessing whether a team or player will successfully win their respective matches.

The Halo Effect is a big reason why…
________________________________________
I‘ve been waiting four years to share this with you...
If you bet on the cricket, you’ll have heard of these two.
One is a record-breaking batsman, and the other the most experienced player in cricket.
To the average punter, these two favourites don’t exactly scream ‘profit machines.’
But here’s the thing...
There’s a small group of unconventional punters out there who are very, VERY excited about them...
Why?
Because they’re using a specially designed ‘betting code’.
This code is so powerful; it could see average South African punters land as much as 93% profit by the end of the cricket tournament.
And you can access it right now! Click here for more…
________________________________________
What is the Halo Effect?
Take a look at the following two people and judge them based on their characteristics:
John: Intelligent – Industrious – Impulsive – Critical – Stubborn – Envious
Sam: Envious – Stubborn – Critical – Impulsive – Industrious – Intelligent
At first glance most people will think that John has more favourable characteristics than Sam. This is odd given that their list of characteristics are identical and are just presented in reverse.
Instead of acknowledging the fact that the only difference is the order in which the information is received, our ‘lazy’ side of the brain seeks to find consistency in evaluating information in order to quickly build a narrative.
This is often what our minds do and at a cost.
Looking at John’s first positive trait – Intelligence – Inclines us to believe the latter traits to support this view and vice- versa with envious Sam.
This is known as the Halo Effect.
What has this got to do with sports betting?
If we were to change the example from John and Sam to two soccer teams and the traits to results or performances. It becomes easy to see how our judgment are biased by the order in which information is acquired, and the significance of that particular performance.
This kind of bias isn’t isolated and people easily become victim to another pitfall in our brain and that is the availability bias which leads us to place greater disproportional significance to events that are easiest to recall.
Availability is largely linked to the strength of our emotional response to events, which is greater when they make a more lasting impression.
So with this knowledge of the halo effect and the availability bias what can be done?
________________________________________
How to generate a R700,000 windfall starting with R10,000 using the oldest wealth trick in the world
This wealth secret is the most powerful force in finance. It’s the force behind almost every fortune. The brilliant financial writer of the Dow Theory Letters, Richard Russell, called it “The Royal Road to Riches.” And it’s been mathematically proven time and time again as the #1 ’how to get rich quick’ trick in the modern world.
Even Einstein joked that it is “the most powerful force in the universe.”
And in my brand new book, The Little Book of Big Income – 10 Filthy Secrets to Get Rich Quick, I’ll show you how to use it to turn R10,000 into more than R700,000 on page 11.
But you must act fast…
My publisher is only allowing me to give away 300 hundred copies as a special launch offer,
Claim your free copy of Little Book of Big Income here
________________________________________
Lessons to learn from the halo effect and availability bias
Our mind is a wonderful and powerful tool and often saves our lives by perceiving danger. However, it has a real weakness when it comes to statistical assessment.
The trick of the trade is to force your mind into action.
And you can do this by:
• Deliberately looking for two to three counter arguments to your judgment
• Deploy as much objective data with as big a sample size as possible
• Ignore mainstream media which often seeds simplistic narratives
The real lesson is not that you have learnt a new fact, but that your understanding of situations you encounter has evolved.
Employ the above and you’ll soon see your sports betting results lean in your favour.
Until next time,

What is the Halo Effect and how does it affect your judgment
Rate this article
Note: 3.5 of 3 votes