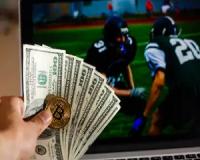 The NFL has become increasingly popular outside of the United States.

Just consider that over $145 million dollars was wagered on the 2019 super bowl!

It's a must when it comes to expanding your sports betting portfolio.

There is a wealth of FREE resources out there that makes betting on the NFL a hugely profitable sports betting opportunity.

And today I want to show you just how easy it is to make a consistent profit from betting on the NFL.

Let's get started…
________________________________________
Ever wanted to trade FX?
Now you can with this simple and unique software package, which includes…
Your user guide, videos, THREE live webinars and more!
No number crunching, no headaches... just obey the arrows!
Don’t put it off any longer, find out more right here.
________________________________________
The most popular NFL betting markets
There are three basic market types in NFL betting; Money Line, Handicap Market and Totals Market.
• Money Line
The Money Line is more commonly used amongst novice bettors because it is simple and straightforward.
It is essentially betting on who will win the game.
• Handicap Market
Opposing NFL teams vary in strength so to counter the perceived bias in abilities, bookmakers offer a point’s handicap to level the playing field.
This is often referred to as “the spread”.
The handicap market is popular with more advanced bettors as it balances each team’s chances and offers more value.
By using an example, we can explain how betting on a handicap works.
Both teams are offered odds on either a plus or minus points score, so for example the Seattle Seahawks might be offered  -6 on odds of 1.9 against the New York Jets, and/or? +6 on odds of 2.0.
A bet on Seattle would win if the Seahawks win by six or more points, and similarly a bet on the Jets would have paid out if they win the game, or lose by less than six points.
If the result was 29-17 to the Seahawks, those bettors who bet on the Seahawks to win -6 with odds of 1.9, would have a winning bet as the point difference is 12.
Six more than the handicap offered.
• Totals Market
Totals NFL betting focuses on how many combined points will be scored by both teams during the game.
Bookmakers offer an option to bet on whether or not the total points will be either under or over the totals mark.
This is why this form of betting is often referred to as the Under/Over.
In both the handicap and totals markets, when a team exceeds the required points for a successful bet, it is called ‘covering the bet’.
Key aspects to any NFL betting strategy
• Yardage differential to evaluate a team’s strength
At its most basic level, the NFL is about the battle between offensive and defensive movements.
One simple way to evaluate the strength of an NFL team is to look at the average offensive yards gained and the average defensive yards allowed per play.
As you would expect, teams that gain more yards than they allow tend to win.
While this isn’t exclusively accurate, this measure can be used as a tool to predict future performances using a yards per play betting strategy.
• Home-field advantage
To work out Home-field advantage for each team competing in the NFL, you should subtract the total points scored by visiting teams from the home teams and divide by the total number of games played.
You will notice after working out the HFA for the past 20 years, each teams Home-field advantage is close to a 3-point mark, which has become standard for handicapping.
________________________________________
There's takeover opportunities everywhere!
If you’d bought stock just before these companies were taken over... I'm talking about Absa, SA breweries, and more recently Clover and Pioneer Foods they 'would likely [ have been] some of the best investments, you could have made says analyst Francois Joubert.
Now, a similar opportunity is building. But this unfolding story is a lot BIGGER
This time around, a certain set of ‘spin off’ companies could be about to break up the JSE.
________________________________________
Key NFL betting numbers to memorize
In terms of the handicap in NFL betting, there are a few key numbers that bettors should be aware of and MEMORIZE!
By understanding what the key numbers are, you can avoid betting on a bad handicap and can even work out which team the bookmaker wants you to bet on.
The is the most common margin of victory in the NFL as most games are decided late on by a field goal (three points), while seven is the second most common winning margin, as this is how many points a team is awarded for a touchdown plus an extra point for a successful conversion.
It is estimated that around 30% of NFL games are decided by three or seven points.
This means that -2.5, +3.5, -6.5 and +7.5 are perhaps the most important numbers when it comes to betting on the handicap in the NFL.
Keep these numbers close to you and you’ll soon see the consistent profits roll in week after week.
Until next time,
Christopher Ammon,
The Winning Streak Team
P.S: Last weekend we saw a +3 point gain in a matter of 24 hours! – Join The Winning Streak Team now to get in on this weekend’s bets!