Could a “ban of cash” by Government and Central Banks ever hit South Africa? 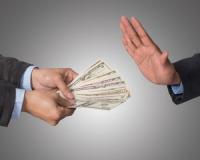 On my trip to London last year, my international colleagues from the MoneyWeek offices discussed an interesting concept that was secretly emerging throughout the world.

They called it “The War on Cash”. Simply, it's a sinister scheme already being actioned throughout the global financial system, which allows governments and Central Banks to keep borrowing, and transfer your wealth into their reserves...

You see, it has long been the goal of rulers to control populations by controlling their money.

It might sound far-fetched but, it's too late for any doubts. Because this strange and dangerous plan is already gathering momentum in the world's biggest economy — America. And just recently, this “war on cash” hit our close neighbours Zimbabwe.

So just imagine if our government or central bank implement a “ban on cash”.

What could you do to survive? Read on to find out...

Three signs a global “War on cash” has already begun…


A cashless society gives governments more control over the people. That’s why banks hate the fact that money is a physical 'thing'. Their aim is to stop paying you interest on your savings.

Actually, they'd prefer you to pay THEM — and give you a negative interest rate like they have in Denmark, Switzerland, Japan and Sweden.

They basically want to charge you for the 'privilege' of holding your cash. Negative interest rates are just the first sign of three in the “war on cash”.

There have been other deceitful ways central banks and governments have implemented a “war on cash”.

And it's happening not just in the United States, but all over the world. In fact, many countries are well ahead of the US in the war on cash.

There are only a handful of shares that provide investors with returns like this in a lifetime.

Finbond, Adapt IT, Shoprite, Pinnacle Technology and Mr Price are a couple of them.

But these shares don’t just go up randomly. There are fixed patterns with all of them.

And if you can isolate what made them successful you could find more shares just like them, before anyone else notices.

Discover the five points all of these ten-baggers had in common in my latest issue out of Red Hot Penny Shares, so you can apply these to your own investing and you could find the next ‘once in a lifetime’ opportunity…

#3: Limits on cash are fast becoming the norm in many European countries...

But what’s really interesting, is the newest member to start its “war on cash”. A country very close to South Africa.


Just recently, South Africa’s naughty neighbour Zimbabwe, implemented a limit on cash withdrawals and transfers of cash outside the country to just a $1,000. A “stimulus package” as the government likes to call it. This is all because Zimbabwe doesn’t have sufficient cash reserves.

And it’s hurting more than just foreign investors and civilians. I spoke with a company that exports commodities like wheat, maize and flour to Zimbabwe. And the worst part is, they can’t even get the money they’re owed out of the country. Essentially, they can’t get paid, which means they can’t buy more products – it’s a lose-lose situation.

But as an investor, what can you do to ensure you’re well-protected from the ruthless policies of central banks and governments?


When there’s central bank and government manipulation, the real winners are those who “hold real assets”


Maybe a “war on cash” occurring in South Africa sounds too far-fetched. But just imagine if you were living in a country where cash is scarce, drawing from ATMs are forbidden and restrictions are placed on the amount of transactions you can make.

Learning to trade Forex is difficult, so don't bother!

So if you want to learn Forex, stop reading now. This letter isn't about teaching you - I just want to make you money.

What do you do when there is a ban on cash? How do you survive a cash war? How do you pay your monthly bills?


Here at MoneyMorning, we always say it, but owning gold in this environment makes sense. Since the start of the year, it’s been doing its job – it’s been one of the few assets to thrive at a time when pretty much all others have done badly.

It’s the same with silver, which has gained around 20% this year alone.

You see, when it comes to profiting and thriving, the main “winners are those who hold real assets”.

But there are other ways to protect your wealth from ruthless governments and central banks, without buying gold or silver.

There are strong signs that several investors can see the potential of Bitcoin. For example, the amount of money venture capitalists are investing in the digital currency is on the rise. By the end of 2015, a record breaking $1 billion dollars was invested into Bitcoin start-ups. That’s more than four times the investment seen in the quarter before.

Another good option is to store physical cash in a safe so that governments can’t steal your hard-earned cash.

P.S. If you don’t know what type of gold to get your hands on, I’ve recently written about investing in gold in the South African Investor, FSPInvest’s flagship investment publication. I’ve also recently released a 2016 edition report, How to Make Money from Gold.


Could a “ban of cash” by Government and Central Banks ever hit South Africa?
Rate this article
Note: 5 of 1 vote