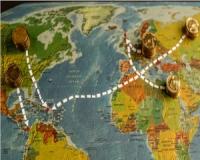 Last Friday, ratings agency Moodys dropped their outlook for SA debt from stable to negative. This means within the next 6 to 24 months it's likely we'll see the last of the three major ratings agencies cut our government debt rating to junk.

As an economist, I am now all but certain the downgrade will happen. SA will become a junk status borrower.
________________________________________
‘The Great JSE Takeover’
If you’d bought stock just before these companies were taken over... I'm talking about Absa, SA breweries, and more recently Clover and Pioneer Foods they 'would likely [ have been] some of the best investments, you could have made says analyst Francois Joubert.
Now, a similar opportunity is building. But this unfolding story is a lot BIGGER
This time around, a certain set of ‘spin off’ companies could be about to break up the JSE.
________________________________________
So, what does this mean?
As a junk-status borrower, it signals to lenders South Africa is now a riskier prospect and there is a higher chance loans will not be repaid. This means our government will have to offer an even higher interest rate to borrow the money it needs.
Currently, South Africa’s debt stands at a whopping R3 trillion. And, since the South African government already can’t cover its spending, it will need to borrow even more to make ends meet.
This is often known as the debt death-spiral.
Recent estimates show our debt could shoot up to R4.5 trillion in the next few years.
The problem is, if the interest rate we offer increases by just 0.1% today, it means we’re going to have to pay an extra R3 billion in interest every year. That’s R8 219 178 (yes over R8 million) every day… R342 465.75 every hour… Or R5 707 that we owe every minute. And that’s just to cover the EXTRA interest on a 0.1% increase!
We’re drowning in debt and just keep asking for more
Like all the other ratings agencies, Moody’s simply doesn’t believe the South African government can repay its debts.
And it’s costing us ordinary folk big time.
The only way for government to get out of this mess is to either cut spending or generate more revenue. Frankly, I don’t see either of those things happening.
After all, government already spends over 40% of its money on wages. (Good luck trying to cut that without enraging the unions).
It spends the rest on grant payments, healthcare and education. None of which are easy – or smart – to cut.
So that means its only option is to raise more revenue?
That too is easier said than done.
You see, there are only two ways the governments can raise money: Either they increase tax rates or increase economic growth. Neither seem possible.
The South African taxpayer already has one of the worst deals in the world. The rate upper income taxpayers face is comparable to the high-tax countries of Scandinavia.
The difference is these few individuals – who foot the majority of the tax bill – use virtually no government provided services. If you tax them more heavily, they will simply leave. And the truth is: They already are leaving.
So, this means the only way to get out of the death-spiral is to somehow achieve higher GDP growth, but I see no evidence the government has what it takes to make this happen. Given our socio-political situation I don’t even believe this is possible. Recent history shows the government simply doesn’t understand what it takes to grow an economy.
And, even by some miracle, if we did manage to increase growth to a measly 3% – which can be achieved by even the stalest of developed market economies – the problems at Eskom mean we’d trigger massive load shedding. Our pathetic infrastructure would collapse under the “burden” of growth.
I love South Africa, but we’re a hot mess. There is no way I can see in which our economy doesn’t plunge further and further into the red.
________________________________________
What’s in the box?
Your opportunity to bank a forever income with Forex
Click here to find out what’s in the box
________________________________________
What’s a savvy investor to do?
Luckily you don’t have to stay for the ride.
No, I’m not talking about packing your bags and joining all the Saffers living in Auckland. But sending your money over there isn’t a bad idea.
These day’s it is very simple for South African investors to diversify their investment exposure away from SA.
One of the best ways to get international exposure is to move your funds directly offshore using your offshore allocation. And, since this allocation expires at the end of each year, this means you have less than two months left to use your 2019 allowance. If you tap into your 2020 allowance early you’ll be able to get twice the money out in a very short period.
So, here’s my suggestion:
Move some funds to an overseas market (such as the US) where you’re likely to get decent growth.
Even if your funds are tied up in trusts or companies, recent market developments have made it significantly cheaper to get your money offshore.
And remember, if you need help doing this, you can contact me at support@randswiss.com.
Rand Swiss offer discounted rates on international transfers. Just add the promocode “OFFSHORE2019” to the subject line of your email and I’ll make sure you get your discount.
We also have a variety of tailor-made international investment options created specifically for discerning investors. So there really is no excuse not to act. The South African investment landscape is deteriorating rapidly. You have been warned!
Viv Govender,
Rand Swiss, Wealth Manager
Tags: viv govender, 2019 allowance, debt, south africa, economy, junk-status, moody's, offshore2019