For the first time in 14 years, the Euro could be weaker than the US Dollar 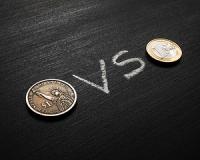 What you're about to read will shock you…

1999 - The Euro came into existence in January which was the goal of the European Union and its predecessors since the 1960s.

Initially there was a negative reaction as the Euro fell below parity (1:1) with the US Dollar for the first time.

From 2002, all seemed to be going better. The Euro notes and coins became legal tender in the 12 Eurozone countries. The Euro rose above 1.0000 versus the US Dollar and the confidence in the Euro continued its rise all the way to 1.5933 against the US Dollar.

I’m sure you’re familiar with the financial crash. This was where there was collapse and failure of a large number of banks in the United States.
Investment banks like Lehman Brothers, Bear Sterns and Merril Lynch. And Mortgage lending companies like Fannie Mae and Freddie Mac and Country Wide Financial.
They all seemed to drop like dominoes one after another.
This caused a massive ripple effect where stocks and indices collapsed over 35% in just a couple of months.
But what may be interesting is this. Since the Great Recession of 2008, the Euro against the dollar has been on a steep downhill slide.

The Euro’s retracement back to parity with the US Dollar What is causing this eight-year downside with the Euro?

Well, no one knows for sure, but I think we can make some assumptions of factors for the Euro slide.

Since then, they have been pumping trillions of Euros into the Economy. This may bring some employment and developments for commercial and residential use, but then there’s a huge problem with this program.
The money supply is loaned money which is increasing the debt of the European Union.
This means, all this money will need to be paid back in one way or another.
And second, with the enormity of money pumped into the economy, this alone is devaluing the Euro itself. The best example I can think of is with the amount of money that was circulated in Zimbabwe. The more money that was in circulation, the higher the devaluation was for the Zim Dollar. And you know what happened there!
Moving on…

Factor #2: The ECB is showing the lowest interest rates in history

The ECB deposit and lending rate is sitting at -0.4% and 0.25% respectively.
The goal of the ECB is to encourage corporate and private spending keeping the money in the bank will generate almost zero interest.
There is a catch-22 for having low interest rates. Having the interest rates at less than 0, makes it unattractive for foreign investors to save money in Europe.
Because they would get a better return elsewhere. For example, Argentina (29.50%), South Africa (7%), America (1.30%).
Anywhere would be better than investing in Europe. And so this could explain partially why the Euro has been on a one-way trip down back to parity with the US Dollar.

23 June 2016, there was a referendum where Britain decided to exit the European Union.
And since the Brexit, the Pound and the Euro have been falling.
Last year in London, every pound I drew cost me R22.00. Today that same Pound would only cost me R17. Investors are taking money out of their positions and liquidity is thinning out for the Euro. Investors are now putting their money into new safe havens. This is causing the Euro to collapse even more.
But now let’s look at the charts and see where the EUR/USD is heading next Since January 2015 until today, the Euro has been forming a break-out pattern (which is similar to the prediction I made on the rand going to R13.30 early in the year) which in this case is the box formation.
Between the high of 1.1477 and the low of 1.0531, the Euro as just been bouncing up and down in this consolidation pattern.
What’s also important is to look at the the previous trend of the Euro. It was clearly on one strong downtrend as you can see in the above chart and the first chart.
And this should tell you, it has a higher chance of breaking to the downside and continuing in the previous trend.
Once the Euro breaks below this low level at 1.0531, we could very easily see the Euro not only go to Parity at 1:1 with the US Dollar. We can expect the next target for the Euro to be at 0.9700.
If you’d like to grab some profitable opportunities during the Euros downside, then click here because a profitable trade is lining up as you read this.
Always remember, For the first time in 14 years, the Euro could be weaker than the US Dollar
Rate this article
Note: 4.5 of 2 votes