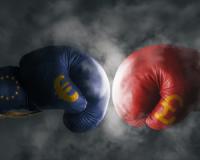 What you're about to read might be great for South Africans, but not so great for the UK.

Just a few months ago I was in London burning my fingers from every purchase. At the time the GBP/ZAR was trading at R23.00 to one pound.

So every item of clothing, gadget and snack I bought in Regent Street was around four times more expensive than here in SA.

MC Donalds alone on average was around R650 for a family of three. One night we ate at a beautiful Greek restaurant called El Greco and the bill ended up to be over R5,000.

In June 2016, it was announced Britain was leaving the European Union.

And since then, the pound has been pounded. In fact, as I type today R17.00 will buy you just one pound.

And it's far from over.

Today I'm making a bold prediction on where the pound is heading next.

Brexit and the impact on South Africa

Let’s first get one thing clear about Brexit and South Africa.
The UKs largest trading partner in Africa is South Africa. And we have some of the largest companies in the world that are dual-listed in SA. Companies like Glencore, Investec, BHP Billiton, Anglo American to name a few…
So when business declines in the UK, we would ‘expect’ the rand to weaken against the pound. And yet, we haven’t seen one slither of rand weakness since.
In fact, we’ve seen rand strength since day one of the Brexit announcement.
So we can throw away the theory of ‘common sense’ and stop listening to the hype of the media with news stories etc…
I’d rather just stick to the charts to get more clarity on what’s actually happening.

The pounds next target is… Looking at the chart, the pound against the rand (GBP/ZAR) has formed what’s known as a Rounding Top.
A rounding top has a low, a high and the same low.
To illustrate this, you can see the low at R17.30 and the high at R25.11.
Once the currency has formed the rounding top formation, you can expect to see the price bouncing up and down on this strong level (R17.30).
You can think of this level like someone jumping up and down on thin ice.
Eventually, it will crack and you’ll fall right through.
Well, this is exactly what happened.
The GBP/ZAR has shattered below this crucial R17.30 level. This means we can expect more downside for the pound.
And when the pound value drops, this means the rand will strengthen.
To calculate the next target, you simply take the difference between the high and the low and subtract it from the low.
Here’s the calculation:
GBP/ZAR Target=Low - (High – Low)
=R17.30 – (R25.11 – R17.30)
=R17.30 – R7.81
=R9.49
This means you can expect the next target to be R9.49 to the pound in the next five months.


There are numerous ways you can profit from the pounds downside
You can short the GBP/ZAR with instruments such as Rolling currency futures, Yield X or Mini Currency CFDs.
If you’re interested in this approach, you can join Forex Trader where I’ll wait for the trades and send them straight to you.
Or you can wait for the target to hit R10 and then you can buy pounds and enjoy a fantastic trip to the UK for a holiday.
Choice is yours…
“Wisdom yields Wealth" I've just made a huge prediction on where the pound is heading next…
Rate this article
Note: 5 of 1 vote