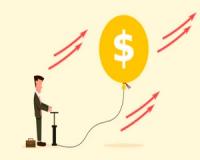 Ronald Reagan once said it is “as violent as a mugger, as frightening as an armed robber, and as deadly as a hitman.”

Margaret Thatcher said “inflation is the parent of unemployment and the unseen robber of those who have saved.”

The SA Reserve Bank didn't increase interest rates - as it expects inflation to stay in check. Most investors are simply ignoring the threat of inflation, and barely any one is preparing for it…

Every economics class in the world covers inflation. But still, it remains something few people understand, and many don't even care about predicting…

But when it strikes, it destroys value as ‘violent as a mugger' - as inflation reduces the value of money you have in your bank account.

What's more - when prices rise due to inflation, it puts a damper on economic growth. It also means retirees living on fixed income will have less money to spend… But inflation tends to be cyclical, especially things like food inflation. And usually after a low-cycle, you can expect a high-cycle.
Now I doubt we’ll return to 15-18% inflation rates like those experienced in the 1980’s…
However, inflation could easily double from 3.3% to 6.6% in the next 12 to 24 months. More likely we’ll see inflation at least increase to around 5% in the coming two years.
This will be driven by things like high fuel prices, high electricity prices and increased food costs on the back of high input costs.
Remember – Eskom gets those sky-high 15% a year increases on the price it charges us for electricity…
And OPEC controls the oil price for ever increasing profits.
January 2021 food inflation came in with increases like 5.1% for bread, 6% for fruit, dairy and eggs, 7.2% for meat and 10.5% for oils and fats.
So, a sustained increase in fuel costs this year could easily see inflation double…
3% more inflation doesn’t sound like a lot…
But consider the difference between 3% and 6% inflation a year. Due to the power of compounding a R1,000 weekly grocery bill turns into R1,384 in 10 years time at 3% inflation. At 6% inflation it is equal to R1,791 a week.
That means you’d have to spend R23,240 a year extra to get the same groceries when inflation increases from 3% to 6%.
What's more, the expectations for inflation will drive investment returns. When you expect inflation, you position yourself differently than you would if you expect deflation.
________________________________________
Our Top 3 Recommendations for New Crypto Investors
Bitcoin hit a new all-time high over $61K. Its market cap surged over $1 trillion. And if you want to dive into an investment that's taking off - and is cheaper and easier than trading stocks or options... crypto is your answer.
These are tiny, under-the-radar names.
All three are priced UNDER $10. It's never been easier to take your shot at huge returns - without forking over a fortune on your initial stake.
Get our crypto Quick-Start Guide right here.
________________________________________
The kicker to the inflation equation is a strong economy
As inflation increases the cost of everything – companies that are particularly exposed to the SA economy will increase income by that same inflation rate (and ideally more).
While the SA Reserve Bank will try to protect our economy by keeping interest rates low – it will push inflation towards the upper limit of 6% a year that the SARB is prepared to accept.
And that means you should remain light on bonds in your portfolio… And probably stick with agriculture, commodities and property.
If you want to know what to buy now in the dash from cash, you can take a look at my colleague Josh's report here.
Here’s to unleashing real value
Francois Joubert
Editor, Red Hot Penny Shares
Tags: francois joubert, investing, inflation,

An investment phenomenon as frightening as a robber in the night is coming for you
Rate this article
Note: 4.36 of 7 votes