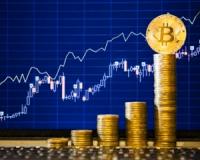 But Ark Invest - a global asset manager with $50 billion worth of assets under management - believes this is only the beginning of Bitcoin's meteoric rise.

In fact, they think Bitcoin has the potential to reach as much as $3 trillion by 2025 versus roughly $900 billion today.

Here's why…
________________________________________
The Best Crypto Move to Make Today
There's never been a better time to make BIGGER - and FASTER - money in the crypto market.
In fact, Sam Volkering is sharing special plays with the potential to hand you the biggest gains of your life - STARTING TODAY.
Here's how...
________________________________________
The more big corporations adopt Bitcoin, the higher it will go
Run by Cathie Wood, a favourite modern day investor, ARK Invest is known for investing in disruptor technologies. They own a number of best performing ETFs in the market.
Cathie and Ark have been big bitcoin bettors since 2015 when the price was just $250.
Earlier this month, the company continued to back bitcoin’s future. They expect more companies will continue to move into bitcoin. Ark believes this is a way for corporations to move away from cash.
ARK first highlighted the idea of firms using bitcoin as a way to diversify corporate cash back in August 2020. That’s when business intelligence company MicroStrategy announced it was investing $250 million of its cash balance in the digital currency. At the time, ARK said the move signalled the start of a larger trend.
And they were right…Consider Tesla’s $1.5 billion bet earlier this month.
As those companies move more of their assets into bitcoin, it will push prices much higher. At the same time, it will support its use on a more widespread basis.
From Ark’s Big Ideas for 2021 report …
If all S&P 500 companies were to allocate 1% of their cash to bitcoin, its price could increase by approximately $40,000. If those companies moved 10% of their cash to bitcoin, Ark sees the cryptocurrency climbing by $400,000.
That’s why ARK believes bitcoin offers "one of the most compelling risk-reward profiles among assets".
And why they think its market capitalisation has the potential to reach as much as $3 trillion by 2025 versus roughly $900 billion today.
This prediction may have seemed crazy years ago, but today it’s certainly not far-fetched. As we’ve seen over the past year, when big corporations back crypto… it flies!
Ark’s putting money where their mouth is…
According to a recent filing with the US Securities and Exchange Commission, Ark has boosted its holdings in the Grayscale Bitcoin Trust (GBTC). It added an additional 2.14 million shares, bringing its total investment to 7.31 million.
The support of these companies is a huge step in the adoption of cryptocurrencies. The biggest payment companies in the world are adding cryptocurrencies to their networks.
That will allow crypto to be used nearly everywhere. And the process would likely be as easy as using a debit or credit card backed by a bank account.
That would further legitimise bitcoin and other cryptocurrencies as a payment method.
________________________________________
Is this trading's biggest quickest cash haul? Inside this free Brand-New Book:
One of South Africa’s top CFD trader reveals R1,500 to R10,750 a week secret.
If you're at all interested in profiting from the markets, reading this FREE book is essential...
________________________________________
It’s clear…Bitcoin is now mainstream!
As Mastercard wrote recently,
"Whatever your opinions on cryptocurrencies - from a dyed-in-wool fanatic to utter skeptic - the fact remains that these digital assets are becoming a more important part of the payments world."
Love them or hate them, cryptocurrencies are now impossible to ignore.
And if you can see the potential ahead for this asset class, a small investment can net you a tidy profit.
See you next week.
Joshua Benton,
Managing Editor, The South African Investor
Tags: joshua benton, bitcoin, investing, crypto,