How are the floods affecting JSE companies? 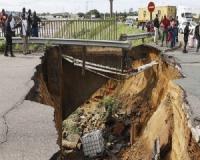 Scenes from the KZN floods were shocking. I'm sure you saw the scenes of container yards flooded, trucks upturned and infrastructure in the Durban area decimated.

The South African government declared a national state of disaster to respond to the flood hit areas.

Homes have been destroyed, bridges, roads and highways have disappeared.
Hundreds of people have died.

We win sometimes. We lose sometimes. That’s what comes with the territory of successful trading.

But when we lose, we make sure they are tiny.

When we win, we make sure they are big.

That is the fundamentals of good trading.

And that is how I’ve designed my trading system … If a trade goes out our
favour, we know where to get out to cut our losses short.

Not even 24 hours and we banked our take profit from following a few rules.

Want to see how we did it?

Hulamin’s operations were shut down due to shortages of liquid petroleum and compressed natural gas. The subsiding flood waters have opened transport routes for the company again, and it is back to normal operations. Exporting product going forward will be the major question for it from here…

Grindrod has also been badly affected by the floods. The company is still assessing the damage but is working with insurance companies to restore facilities and recover customer containers.

The issue here is even if insurance covers the losses, the lost time means no growth, and less profits.

The major caveat is the longer it takes to repair the damage – the higher the toll of the damage will be.

You see, it will take some time to repair roads. Government will have to tackle main access routes ASAP as this isn’t just businesses that are affected, but
people that physically need food. SANRAL has indicated it is immediately focussing on repairs on the N2 and N3 highways, with 1,300 road repair projects already identified.

Coal luckily is transported through the Richards Bay Coal Terminal.

And the Richards Bay Coal Terminal (RBCT) is operating as normal – and has not been damaged due to flooding.

But there’s another problem…

Transnet declared a ‘force majeure’ to its customers on the rail line to the RBCT. Cable theft and vandalism on the line is rampant and is affecting Transnet’s ability to transport anything on the rail line.

According to Argus-McCloskey statistics, the AP14 coal price FOB (free-on-board) from Richards Bay hit levels north of $300/t for April which is nearly triple the levels ruling in January this year. So, coal companies are losing out BIG TIME due to Transnet’s inability to deliver.

Floods like the one’s in KZN happen. Cable theft happens. But the government’s response to these things is what matters. Speedy resolutions, fixing roads, improving security, maintaining infrastructure are all easy ways to limit damage to businesses. But the South African government is unable to effectively do this.

As an investor, you need to ensure you invest in companies that can hedge themselves from the government’s inability to govern…

Offshore income has been one of the most important ways to do so in recent years. Up to now though, companies that export have been safe options. But that may be changing. So, you should probably look for companies that have operations offshore instead.

Think of a company like Argent Industrial. It invested in businesses in the UK a couple of years ago. And thanks to this the company’s grown earnings per share from 69cps in 2017 to 217.9cps in March 2021 – despite the pandemic.
And indications are its 2022 earnings will be around 300cps. So, its R13 share price means the companies on a PE ratio of less than 5 – and that with huge offshore businesses to hedge its income from the rand. Or Etion, a telecoms and military technology company with clients across Europe and the Middle East. Its most recent interim results came in at 4.16cps – while its share price is less than 50c. The company’s net asset value per share is 76c – a 58% premium to the current share price… These are the kind of companies I research and share with my Red Hot Penny Shares readers, to find out more click here.

PS. If you’ve always wanted to learn to trade forex, commodities and cfds on shares then, I can recommend my colleague Timon Rossolimos Mati Trader System.  He’s been perfecting his system over the last 20 years and had a profitable time doing it. If you keen to trade for a second income , then go and take a look at what he’s offering.

How are the floods affecting JSE companies?
Rate this article
Note: 5 of 1 vote