Hunting the flying cows of Bermuda 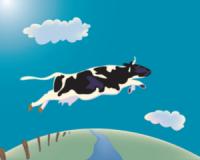 “The state has grown used to treating its taxpayers as a farmer treats his cows, keeping them in a field to be milked. Soon, the cows will have wings.”

- The Sovereign Individual, James Dale Davidson & Lord William Rees-Mogg
The Sovereign Individual was written in the mid-90s, and predicted a future where computers and the internet would ultimately kill nation states, ushering in a new era of individualism.
Many of the late Rees-Mogg’s predictions have come true over the years, from the fall of the USSR to the collapse of the Japanese stock market. His keen eye for the future kept readers of his newsletter, The Fleet Street Letter, ahead of the curve and prepared them for shocks that took everybody else unawares.
What he was referring to by cows having wings was his idea that cyberspace, the digital stateless realm, would become a tax haven. He believed the internet itself could function as an offshore jurisdiction, where wealth could be stored and grow free of tax – what he called a “Bermuda in the sky with diamonds”.
Editor's Note: 'Why I think thesefour shares could make 2018 the most profitable year of your life...'
A lack of physical wealth to tax (an absence of “cows” to “milk”) would starve governments around the globe. In response they would try to violently attempt to suppress the internet, before ultimately collapsing from a lack of tax revenue.
How could wealth be taken completely online and out of reach from the state? You would need a purely electronic form of money, completely outside of government control. Some would argue Bitcoin, the “internet of money” holds these properties – it’s certainly hard to tax.
However government actions, as we’ve seen recently in China have an effect on Bitcoin’s price and network activity; it is certainly still tethered the affairs of the real world.
A colleague of Sam Volkering, Charlie Morris, believes electronic money doesn’t actually exist yet and that cryptocurrencies like Bitcoin are not actually currencies at all, but “digital assets”. Here’s what he said:
“You might think that electronic money already exists, but it doesn’t. Internet access and payment systems have merely allowed us to access our bank balance in real time and make transfers in a more efficient manner. Electronic money is taking it a stage further. It would enable you to use the pound, but without your bank. The Bank of England would issue the pound in a controlled manner, and people would be able to store it in a software wallet without the need for a bank.”
“If digital assets, which sadly have become known as cryptocurrencies, were actually currencies... they could be issued by a central authority, and they could pay potentially interest (currently they don’t). Yet for digital assets to be currencies, they would have to represent cyberspace in some form or another. Perhaps they will in time, but my analysis suggests that they don’t, and won’t. They are merely independent networks whose value is directly related to their adoption and utility.”
Currency or not, the anonymity provided by crypto makes taxing it difficult. But it’s not just the taxman who wants to peel that away.
Final curtain: You only have a limited time left to secure your copy!
Data is the opiate of the technocrats
“nothing is covered that shall not be revealed; nor hid, that shall not be known.”- Matthew 10:26
Companies like Google have made their fortunes monetising the endless deluge of personal information we put online. Your search history, the content of your emails, and your location (provided by your smartphone) are all packaged up and sold to marketers trying to sell you their products. This practice of accumulating and then flogging personal data has become known as “surveillance capitalism”.
And now the data parasites have found a new host to suckle from: cryptocurrency transactions.
The World Wide Web consortium (W3C), in collaboration with Google, Microsoft, Facebook, Mozilla and Apple has announced they are developing a “currency-agnostic web payment standard”. Effectively, this would allow you to store bitcoin and other cryptocurrencies on your internet browser, allowing you to pay and send currency without needing a third party like PayPal to facilitate the transfer.
The idea for this system emerged in 2013, where a man named Manu Sporny described it as:
“What a financial system would look like if you took what worked on the Web and used the same approach to create a financial protocol.”
If the development is a success, spending cryptocurrency will become even easier. The news legitimises cryptocurrencies – Bitcoin is hard to dismiss as a fraud when Google is building its use into the most popular internet browser in the world.
But generally speaking, Google will only make your life easier in return for information about you that it can sell – your financial affairs are no exception. If a user only has one bitcoin wallet, as many do, and then tell Google its address (which would be almost guaranteed with this payment application), Google will be able to link them to every bitcoin transaction they have ever made. Plenty of meat for the marketers there.
The intelligence community will be after this data too – in the interests of national security, of course. No to mention the taxman – the farmer has no intention of seeing his cows fly away to the Bermuda in the sky.
The app effectively voids all of the anonymous properties of bitcoin. It will be very interesting to see if Zcash or Monero, cryptocurrencies designed specifically to be untraceable, will be supported by this new application. Something tells me they won’t.
Always remember, knowledge brings you wealth,

Hunting the flying cows of Bermuda
Rate this article
Note: 4.17 of 3 votes