Inflation is back. What to expect, and how to deal with it… 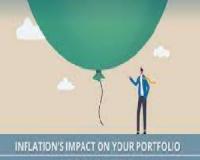 Last week the Federal Reserve pushed US interest rates up by 0.75%. This was an attempt to fight inflation which has risen to multi-decade highs.

By raising interest rates, the Fed hopes to slow economic growth and stifle employment. This will reduce the demand for goods and services within the economy and (hopefully) get inflation under control.

It's important to understand reducing growth, and causing a rise in unemployment, is not an unfortunate side effect of raising interest rates. It's the main way in which the Fed (or any other central bank) fights inflation.

If fighting inflation remains a focus of central banks, there is no question economic growth in the US and the rest of the world will be reduced.

So, let's take a step back.

When markets are trending downwards or are moving around substantially, it's tempting to change your investment strategy or reconsider your objectives. A better approach is to be consistent in your strategy. Of course, it's important to regularly review your strategy, ideally with an adviser, but try to avoid kneejerk reaction investing.

I started out investing in the financial recession of 2008/2009. At the time it seemed scary, investing in a crashing market. But the fact is, there’s no better time to invest than when strong companies are at multi-year lows.

Right now we’re seeing many small cap companies trading at dividend yields of 10% or more, other companies on Price Earnings ratios of below 5, and some trading at 50%, even 70% discounts to the underlying values of the companies. And that’s a good time to invest!

What makes high inflation so bad that you would rather have a recession and higher unemployment than deal with its effects?

Firstly, once inflation gets into an economic system, it quickly becomes entrenched. This is not difficult to understand. Inflation is the general rise in prices within an economy. And they can be very quick to spiral.

If you’ve experienced an average increase in the price of goods and services of around 10% during the year, the next time you negotiate your wages or salary, you would likely want to see an increase of at least 10%. Often, when people see prices starting to rise, their expectations start to shift. They think prices will continue to rise in future. That means, you might even push for a slightly higher increase because, well, you expect your living costs to rise even further.

Your wage demands of course need to be funded by the company you work for.
Your salary demands increase the firms’ costs. Firms then need to either hike the price of their goods and services further to cover those costs, or face going out of business. This means you as the consumer now once again need to pay higher prices at the tills. This puts you under more pressure and the cycle starts again...

As everyone continually tries to pre-empt the next round of price increases, things can easily get out of control. In the most extreme cases: Hyperinflation.

Hyperinflation, or even inconsistently high levels of inflation, can be absolutely catastrophic for an economy. Very rapid increases in prices quickly make non-essential firms uncompetitive and prompt them to shut down. In SA we only need to look north of our border to see the effects of hyperinflation in Zimbabwe. But there are many examples throughout history. Weimar Germany, Venezuela or even Hungary post-World War II. Let me tell you, the economic picture of hyperinflation is not a pretty one.

Now, today, the primary goal of most central banks is to ensure the inflationary cycle described above, never even starts. It’s one of the reasons they’re usually very clear on inflation targeting. If inflation does begin, they usually have no issue causing a recession to prevent what they perceive as far greater consequences further down the line.

So, what can you expect going forward:

1)    Where the US leads, SA will have to follow. Now that the US has raised rates, we will have to do at least as much. If we don’t, our currency will weaken, which in turn will cause inflation in SA. So, even if we aren’t facing the same level of inflation as the US, we will have to raise interest rates anyway.

2)      Economic growth will fall, and unemployment will rise. As I said, this is the way central banks fight inflation. You can expect weak companies to go bust and even strong companies to see an impact on their earnings. Sales of items that require financing like housing and vehicles will be negatively affected as the cost of money increases.

In previous articles I’ve been warning of very difficult times ahead. I’ve recommended you increase your emergency savings buffer. And I’ve recommended you increase protection of your assets where you can. We’re currently in a period where almost all financial assets are (or will be) negatively affected. But some will adjust quickly, others will take some time,
while others still will be far less affected.

The discussions I’m having with my clients currently are to focus on three things:

Firstly, protect your capital where you can. In this environment it’s more important than ever to make sure your bread-and-butter money is securely invested. I’ve recommended a number of capital-protected options for clients recently that still offer very reasonable upside returns. Our most recently closed product offered 100% downside protection and a maximum (and highly probable) US dollar return over a 5-year period of 58%. That’s almost in line with the S&P 500 average annual return, all without having to take any downside market risk.

Secondly, I’ll take this a step further. When the economy is in this kind of tough spot, and you see firms forced to retrench staff or downsize to stay afloat, having some sort of income protection policy in place is more vital than ever before. This is another way you can become secure even in challenging times. There are measures you can put in place to protect your ability to put food on the table, even if the worst should happen.

*Read*: How to use market volatility to generate an income 12 times a year

And finally, I must also point out that different asset classes react to recession in different ways. Real-estate tends to adjust to interest rate hikes more slowly than listed securities markets. You’ll often see property markets stagnate months or even years after a stock market has bottomed. And while I have no doubt higher interest rates are going to see earnings under pressure, the more than 30% fall in an index like the Nasdaq does present real opportunities for those with a longer-term time horizon. A lot of the earnings collapse I’m talking about above, is already in the prices of these shares.

Now, nobody will be able to tell you where the bottom of the stock market is, but if you have time on your side, there are some incredible share-based bargains to be collected currently. You’ll likely need to have the risk tolerance to ride through some pretty hairy volatility, but longer-term, the benefits of buying into deep selloffs are very, very compelling.

Inflation is back. What to expect, and how to deal with it…
Rate this article
Note: 4.5 of 2 votes