Is a trillion-dollar Tesla still worth buying? 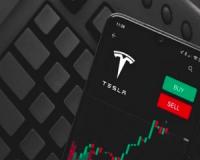 Tesla Motors recently entered the exclusive $1 trillion dollar club. This means the company joins just a handful of other mega-corps that have a market capitalisation of one trillion dollars or more.

This means Elon Musk is once again the richest man in the world. His lead over number two, Amazon's Jeff Bezos, is almost $100 billion. His net worth is close to $300 billion. To give you some idea just how rich he is, remember the mountain of gold that the Dragon Smaug had in the Hobbit movie, well, at the current gold price, Musk's net worth is roughly equivalent to two of those mountains.

Tesla has been the world's most valuable car company for some time, and the gap between them, and the rest of the field, has grown even larger. The most recent spurt was caused by a massive order from car rental company Hertz. They bought about 100,000 cars from Tesla. Obviously, this is great news, but even if the order was pure profit (which it isn't) it would still be dwarfed by the movement in the share price.

The gap between the economic reality of what Tesla produces in the real world, and it's share price, is so large there is no way you can explain Tesla as just a car company. There is no way, based on the motor vehicles they manufacture, to reasonably justify its current share price.

Tesla would have to make more cars than virtually all other car companies on the planet combined, and maintain a higher profit margin, in order to justify its current market valuation.

And worried you don’t have enough saved…

Then you’ll want to pay VERY close attention to this short message.

Because today, I’m going to show you how to claim your FREE copy of my 2022 report, The Perfect Retirement Income Accelerator.

Find out why I would give you a copy for free here?


So, based on valuation, is Tesla a certain short?
Many people believe so, including famous investors such as Michael Burry. Burry had a massive, 500-million-dollar, short position on Tesla earlier this year. He has since exited it, but he wasn’t alone. Tesla is one of, if not the most, shorted stock in the world. As you can imagine this has been very unprofitable for short traders who are betting the share price will fall.
In 2020, it’s estimated that close to $40 billion was lost by Tesla short sellers. Even if you believe that the market cap is unjustified, I personally would caution against shorting unless momentum changes significantly. Remember, the market can remain wrong longer than most people can remain liquid. Tesla might be teaching this old market lesson to a new generation of short sellers.
Also, remember a stock’s price can only fall to zero, but there is no limit to how high it can go. Technically speaking, there is no limit to the losses that can stack up against you if you’re short.
Is there any chance that Tesla is a good buy at this price?
If you believe Tesla is just a car company, the answer is likely no. But I believe Tesla is more than that. It has Tesla energy which includes both Solar and Batteries divisions. It’s also a leader in Self-Driving technologies.
For now, the Solar division remains small. And, although the company has done some interesting things with solar, such as the Tesla Solar roof, this remains the smallest part of the business. It was also arguably the least successful. So, I would be very surprised if anyone used this as a reason to justify the trillion-dollar price tag.
The Battery division is more interesting. You may have heard of the Tesla Powerwall but it’s just the tip of Tesla’s battery operations. They’re currently aiming at residential, industrial and even government customers. In addition, the company has brought a great deal of innovation to the area. They have targeted different battery chemistries that aim to eliminate the use of certain materials such as cobalt. They’ve already made incredible strides in reducing the cost and improving the efficiency of the batteries they use.
I believe it’s the battery technology which is largely responsible for justifying the incredible valuation.
Then there is the Tesla Autopilot and AI project. It could easily make up the rest of the valuation story. This project is one the most ambitious technical projects in the world. It rivals even SpaceX, another Musk company. If successful, it will transform not only the car industry but every aspect of the human experience. I believe, it’s impact on the world will be as large, if not larger, than the creation of the internet.
If the fully antonymous AI driving system, currently being pioneered by Tesla is successful, it would certainly be enough to justify the current market cap and much, much more.
Now this may sound a great deal like science fiction, but I wouldn’t bet against it. Just look at SpaceX. Musk’s ambitions for space seemed like fantasy a decade ago. Now SpaceX is responsible for a huge portion of space cargo across both private companies and governments.
As part of this ambitious AI project, Tesla is building its own chipsets that could rival Nvidia. They are innovating in one of the most competitive and highly technical sectors possible.
You may not be aware of this fact but the major bottleneck for modern AI technology is the lack of data.
________________________________________
Sam Volkering: This new tech could be bigger
than the internet
It’s a technology that could change everything from how you pay your taxes to how you access your medical records…
And you can find out the two best ways to play it – FREE OF CHARGE.
Just click right here to see how.
________________________________________
Due to Tesla’s massive fleet currently on the road, they simply have access to orders of magnitude more data than their competitors. In addition, the company is pursuing an ambitious product cycle, meaning that they want the time between new versions of the AI that will be available to customers to measure in days or weeks rather than months and years.
Finally, this technology will find applications outside of cars. Musk has announced his intention to develop a humanoid robot. This makes sense if you think about it. A driving system that allows a multi-tonne vehicle to safely navigate city streets, can easily be adapted to allow a 75kg robot to walk around a house.
No matter how I look at it, this is an exciting business. Many professional investors have been scared off by rich valuations. And they’ve been wrong to sell.
However, investors in my dynamic, pre-built, tech-basket portfolio have taken all this upside and more.
You see, Tesla is just one of the 10 stocks I hold in this fully managed portfolio. This pre-built strategy gives you access to the 10 stocks I believe are most likely to change the world. You get all with the flexibility and transparency of a personal share portfolio, without the hassles associated with managing it yourself.
The minimum investment is R100,000. All you need to do to get started is send us your FICA, complete an online application form, and do a simple local electronic fund transfer (EFT). We’ll take care of the rest!
Email your name and phone number to support@randswiss.com with the promocode TECH21 and one of our representatives will call you back. They’ll guide you step-by-step through the application processes. And before you know it, you’ll be fully invested in 10 exciting companies like Tesla.
Have a wonderful weekend!
Viv Govender,
Senior Analyst, Rand Swiss

Is a trillion-dollar Tesla still worth buying?
Rate this article
Note: 5 of 1 vote