Is it now time to bail on JSE listed stocks for good? 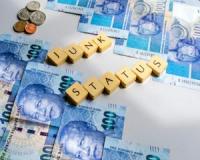 With politics the way they are and the performance of the South African economy many investors are asking whether they should bail on SA listed stocks for good.

I'll give you my take on the situation now, let's first have a look at the facts:
SA’s economy is already being treated like ‘Junk’ by investors
Even though the last credit ratings agency still hasn’t downgraded SA to junk status, investors are already treating bonds, stocks and our currency as if we have reached junk status.
But here’s the thing, if you look at the JSE’s performance in comparison to stock indices for the rest of the world – our performance has been largely on par.
Just look at this chart: 
According to Harold Strydom at Citadel asset management in a recently placed article South Africa has performed on par with the MSCI World index, excluding the USA. Looking at this chart you’ll see that the US has properly outperformed the rest of the world in the past decade – and South Africa basically matched the rest of world performance.
This has been on the back of dollar strength, US quantitative easing disproportionately boosting the US economy and the US trade war affecting developing markets and currencies.
But I can hear what you’re saying right now…
SA’s politics and the slow economy is behind our stock market’s underperformance isn’t it?
Well sure, politics and government policy is affecting the South African economy. Our country is growing slower than it should and that’s affecting each citizen’s wealth and income.
But the fact is most JSE listed companies derive an income from outside of SA. And there are many SA based companies that are actually GROWING profits. Yet their share prices are dropping along with the rest of the market.
The reason for this is that increasing dollar strength with rising interest rates in the US mean funds are flowing into the US and out of emerging markets. And that’s the bulk of the reason that ALL emerging markets are struggling compared to the US.
The US Dollar Index shows how it has become stronger against other currencies in the last decade

So what exactly is this lunch-hour secret?


That doesn’t mean the SA economy and politics has no bearing on the stock market. It simply means that what happens globally has as much bearing on our stock market as what happens locally.
Is SA Inc headed in the right direction or should you move your money out now?
So, what I’ve just confirmed is that although the SA situation does bear down on sentiment and is also keeping our market depressed – much of it is also the US Dollar that is too strong against most other currencies right now (due to a unique situation in the US).
That said, what is the situation in SA and will our economy turn back into solid growth territory?
SA Recovery Indicator #1 – Eskom HAS to be fixed
In order for our economy to thrive Eskom has to be fixed. Right now, Eskom has an acting CEO. Firstly I would need to see a new CEO being appointed ASAP. Minister Pravin Gordhan is overseeing a draft policy paper to spell out Eskom’s future. In order for Eskom to work we would have to see it being split up and its debt being reorganised so that the company can become sustainable again.


SA Recovery Indicator #2 – Consumer confidence has to return
Due to low economic growth (and a recent recession) consumers aren’t spending as much at retailers, restaurants, on new cars etc.
Consumers have to have confidence in the economy to do so. We need this to return.
There are positive signs. For instance SA Reserve Bank data shows that residential mortgage advances grew by 4.9% year on year in August 2019. That was the highest growth since November 2010. This shows that at least people are buying property again. According to this data transactions in the R700,000 to R3.5 million property bands are up.
According to economist, Mike Schussler, this could be a sign the residential property market has bottomed out and now is time for an uptick in property prices to start again.
South African consumers are feeling slightly more positive, according to the Consumer Confidence Index (CCI) for the second quarter. It showed a 3-point increase to 93, presenting a marginally more positive quarter-on-quarter picture of consumer sentiment.
Retail sales growth sits at around 2% and latest figures show that car sales are down. Until all these figures turn positive SA isn’t in recovery yet.
SA Recovery Indicator #3 – What are international investors saying?
In 2018 SA saw some of its largest foreign direct investment inflows in a decade. Whilst 2019 saw a small dip, you’ll see from the chart below that foreign direct investment is picking up again, rapidly.

Just think of PepsiCo which is in the process of buying out Pioneer Foods, Clover that’s also a target… In fact I’ve identified a string of locally listed companies that are, or could soon become, takeover targets.
This is because foreign investors, funds and businesses are seeing immense value in SA businesses DESPITE all the doom and gloom being spouted by the media. Should this continue there’s no way the JSE will remain depressed for another two years.
In short I believe you should have cash invested in international funds.
But the JSE is by no means dead, and there’s a lot going for the SA economy – government just needs to act so that it can return confidence to consumers and local investors.
Here’s to unleashing real value

Is it now time to bail on JSE listed stocks for good?
Rate this article
Note: 4.25 of 2 votes