Is the bear market nearing its end? 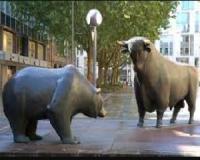 We hear about inflation, war, lockdowns, supply chain issues all as contributing to this bear market…

Stocks like Prosus, Amazon and Naspers all plunged in share price but others like Jubilee, Argent and Santova’s share prices have exploded – doubling in less than 12 months.
If you want to know where to find value stocks that could see you into early retirement then take a look here!

Economies worldwide have just started to recover from the depths of their Covid-fuelled recessions in 2020. Commodity prices started soaring due to heating up economies and too slow delivery of supplies through a sluggish supply chain. Then the war in Ukraine happened – with huge sanctions instated against Russia, the world’s largest commodity supplier. Here’s how these factors are hurting markets right now:

Factor #1 – Continuing lockdowns in China
China remains on its Zero-Covid policy. That means it continues to lockdown towns and cities until there are no Covid cases. Shanghai has been under strict lockdowns for over a month now. The city alone has a population of nearly 30 million, with a GDP that’s around DOUBLE that of South Africa. While its difficult to get reliable figures out of China, estimates are that around 86 towns and cities were under lockdown at various stages in the past month.

These lockdowns mean a lot of manufacturers aren’t running at full steam. It also means ports in China aren’t shipping goods as efficiently as they should.

That’s part of why global supply chains are still hurting. It’s also one of the reasons for sky-high inflation – as imported goods are more expensive.

Fitch ratings agency recently penned an article detailing this specific fact – lead times for semiconductors out of China is rising, and freight times out of China to the US have DOUBLED, while shipping rates have increased six-fold.

Until China returns to business as usual this will continue negatively affecting the rest of the world, and the US in particular because of the large amounts it imports from China.

Factor #2 – Commodity inflation because of the Russia/Ukraine war
Russia is the world’s largest, or one of the largest, producers of many commodities like Palladium, wheat, oil and gas. Ukraine itself is also a huge producer of wheat, maize and barley. In fact, Ukraine alone, exports wheat to feed 400 million people annually.

That means our fuel price is more than double the June 2020 levels of around R12 a litre.

That means interest rates are heading up.

In the South African context, a 2% increase in interest rates isn’t big. But imagine this – you live in the US. You bought a $1 million home at the end of the pandemic at a 1.5% mortgage rate. Interest rates now go up by 2%.

Suddenly your interest repayments on this home has more than DOUBLED.
Monthly repayments soar from $3,700 a month to $4,800 a month. That $1,100 a month difference will hurt a lot.

By increasing interest rates a couple of things happen. Firstly, it puts downward pressure on property prices. Or at least bars them from continuing to go up.

Secondly it decreases disposable income of consumers. And that leads to less spending. Lower consumer spending decreases the demand for imported goods, cars, fuel, food and restaurants. All of this serves to curb inflation.

This is because inflation has soared due to a string of factors working together.

The higher interest rates go the higher the ‘risk free rate’ becomes. This is a number analysts use to value shares, and it is based on the US 10 year government bond. The rationale is if the US 10 year bond is say 3% - shares have to outperform 3% by a risk adjusted margin to make the risk of investing in uncertain shares worth not investing in bonds.

Now 3% is low. But in August 2021 the US 10-year bond was at a 1.21% yield.
So, its yield has already doubled in less than a year. Predictions are the yield will increase to around 4% before inflation comes under control.

I suspect between 5% and 8% further downside for the coming year.
That doesn’t mean all stocks are dropping. Many companies are actually still growing profits, and growing them much faster than inflation. You simply have to look for the ones that have attractive growth levels, low debt and hopefully a dividend or share buyback plan in place…

Just this week I told Red Hot Penny Shares readers about a property company that’ll pay a more than 10% dividend this year, a property developer that’s grown profits by triple digits, and a precious metals and base metals producer that’s set to see triple digit revenue growth in the coming year. Another long time favourite of mine, Santova, just announced earnings growth of more than 160% - and its share price has soared by 144% in the past 12 months and 24% in the past month alone. This shows there’s definitely still opportunity to profit in small companies!

Is the bear market nearing its end?
Rate this article
Note: 4.67 of 6 votes