It pays to be a contrarian investor in times of crisis! Here's why… 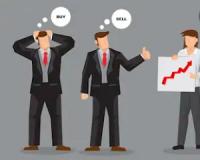 You know the saying…“Out of crisis comes opportunity”?

Well, today I'm going to share two investors who followed this “investment mantra” and made a fortune.

Plus, I'll show you a way to access some great opportunities in our market that exist right now thanks to the pandemic.
________________________________________
"There are decades where nothing happens; and there are weeks where decades happen.”
Are you ready to be a part of the Next Wealth Transfer REVOLUTION?
Click here
________________________________________
#1: Sir John Templeton’s 400% contrarian bet during World War 2
Just before World War 2 broke out, John Templeton used $10,000 to buy shares in every company trading on the NYSE for under $1 – just as Hitler’s German army was moving across Europe and western pessimism was predominant.
A few years later his investment paid off. He made a good profit after paying off his debts. Amazingly his portfolio grew by more than 400% over the next five years.
From this ‘experiment', Templeton refined his investing approach, and he never looked back. In fact, he was so successful that $10,000 invested with him in 1954 would have been worth more than $2 million by 1992.
#2: Jim Rogers’ 1970s contrarian bet led to a 4,200% gain
In October 1973, the Yom Kippur War took place when a coalition of Arab states led by Egypt and Syria launched a surprise attack on Israel. This attack saw a strong Israeli army suffer losses and huge damages to its weaponry and air force.
Israel's prime supplier of weapons was the US. The US wasn't happy at the news that Israel was on the defensive and that some of its military technology was out-dated and depleted.
However, Quantum Fund owner, Jim Rogers, saw this dire situation as the perfect opportunity.
In mid-1974, Quantum Fund began scooping up defence stocks – some selling for a dollar or two. Rogers knew that defence companies would get their contracts renewed and would provide fresh earnings over the years.
He bet on the idea that the modern battlefield was changing and new technology would be developed. And he was right.
President Ronald Reagan started a programme to revitalise US defences, and Jim Roger's knew the biggest beneficiaries of this development would be stock holders of defence firms.
In addition to other smart investments in the bull market of the 70s, by 1980, Jim Roger’s Quantum Fund was up 4,200%!
________________________________________

Sam Volkering says a new crypto boom is set to unfold.
Is he out of his mind? Or could he be on to something?
Josh Benton has the answers
CLICK HERE to read his latest findings
________________________________________
So how can you become a contrarian investor and profit from today’s crisis?
You need to search for stocks that have fallen in price and are priced way lower than their real value.
Basically, stocks that have become mispriced as a result of temporary changes in the near-term expectations of sellers.
The recent Covid-Crisis is a perfect example of this. Just take a look at the low GDP growth rates around the world, massive unemployment figures, negative interest rates, and general unrest.
All this may scare you away from stocks today. However, as history and the world’s greatest contrarian investors have shown us…
It pays to be a contrarian investor in times of crisis!  And today could not be a better time to exploit today’s crises and bet on stocks that could make you a fortune in the long-term.
Can you see which sectors of industry stand to benefit?
I’ve just completed a brand-new report for my Real Wealth readers, in which I reveal the sectors that stand to profit from this crisis in the short term and more specifically three quality SA companies whose share price could rocket in the next 12 months as their share prices rebound.
But you need to act fast, this mispricing in the market won’t last long – get in now to ride these stock prices up to double even triple digit gains in the next 12 months.
See you next week.

Joshua Benton,
Managing Editor, The South African Investor
P.S. My brand-new report highlight the sectors that could profit from the lockdown and in particular, three stocks I think could be your best investment in 2020 and beyond!
Tags: joshua benton, covid, investing, contrarian investor,

It pays to be a contrarian investor in times of crisis! Here's why…
Rate this article
Note: 4.5 of 2 votes