Macron wins French election, settles markets - Two to buy and one to sell 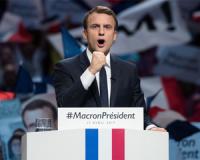 US markets closed at record highs on Friday, helped by technology stocks like Apple, Facebook and Google. The strength of the US markets is filtering through to other developed markets and the victory by Emmanuel Macron in the French elections eliminates one more hurdle. Improving global sentiment bodes well for the weeks ahead.

The rise in technology stocks is playing out nicely for our investment theme in Internet Technology stocks, and we remain bullish. Overall market ratings are very demanding and this creates some risks, but our reading of current sentiment is that markets are becoming more bullish.

All of which is having a mildly positive effect on the SA equity market, which is now up 6% for the year to date.

The week was, however mixed, Resources (down 1,8%) remained under pressure thanks to softer commodity prices. Local financial stocks also felt the effects of a weaker Rand. Industrial Rand hedge stocks, like Richemont, Mondi, Reinet, British American Tobacco and Naspers reacted to the weaker Rand with positive performances.

MTN released its quarterly update to end March. The new management team has settled in and operational performance was relatively solid. (Revenue up 7%). There are signs of improving momentum in several areas, particularly subscriber growth and data revenue in Nigeria and Iran. Management is addressing areas of underperformance. For some reason the market did not like the update and the shares traded lower by 8%. In our view, this is a good buying opportunity and Rand weakness should support the share price. Buy around R117,55.

We have previously highlighted the dramatic moves in resource counters. Commodity prices have stabilised, supported by good growth in China and better visibility in global demand. The recent sell-off is losing momentum and these are good levels to start adding exposure. Anglos has been repositioning itself and looks well set to deliver consistent results. Guidance in a recent production report indicates all is on track. I have seen several institutional reports calling the stock high by 80% plus. Look for an entry below R180.

Sell Life Healthcare -  Enjoyed the run, caution ahead of results

We have had a great time trading the Life Healthcare corporate action and you should have made a tidy profit. If you are trading short-term, we recommend banking at least half the profit ahead of the company results. Due to adjustments in the acquisition of Alliance Medical, the headline earnings are expected to be down about 70%. This will escalate the P/E valuation and could limit the trading range of the share. Sell at R30. Results will be released on 12 May 2017.
(This article is an extract from Prodigy’s weekly Investor Digest. For more information contact Gavin McCarter on gavin@prodigyam.co.za.)
Director of Prodigy Asset Management
Guy@prodigyam.co.za

Macron wins French election, settles markets - Two to buy and one to sell
Rate this article
Note: 5 of 1 vote