Moving swiftly along - Three to buy 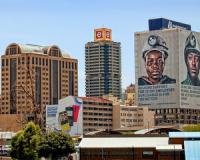 A week of heightened protests has ended and the ANC Cadre are holding the fort, for now. Their confidence masks the growing dissension from all sides, including members of its own party, eventually pressure will come to bear.

Fitch followed S&P in downgrading SA, but again the reaction was relatively muted. Clearly the market had been preparing for this eventuality. Of more concern is that some MP's don't seem to understand the ramifications of a downgrade - for all of us.

The All Share index, managed a positive return of 2%, helped by Rand hedge stocks. Gold Shares jumped 20%, while Financials were under pressure. Banking stocks and other financials had a poor week, building on losses from the 30 March.

Global markets were relatively uneventful and trading within a range of 1%.

Banking stocks have sold off by 11% in the past 10 days. Some stocks are down 15% to 20% from recent highs, while it may be a bit early to jump in, I suggest watching this area for support then start building a position, perhaps later this week. Don’t go all in, as there is still potential downside risk. My preferences are Nedbank at R225,00 and FirstRand at R44,00.

Our sell call on 13 March at R260 has seen the stock pull back as expected (15% in 3 weeks). Results from Capitec and Curro were strong, but with the market was left questioning their lofty ratings. PSG’s business is largely insulated from Rand weakness and their full year results will be released next week. Buy at R225.

Our short trade on LHC has been our most successful in several months. As expected, the price is now near the right offer price and it should find support here and then recover. We feel this provides a good entry point and would buy at current levels of R25,20 and below. Use CFD’s or SSF’s for some gearing, but keep exposure within acceptable risk limits.

The Rand Hedge positions we are holding have performed very well. The Rand could easily extend beyond R14/$ and even R14,50 in the near term. Maintain exposure to the Rand hedge stocks that we suggested, like: Anglo, Billiton, Amplats, Richemont, Sibanye, Naspers and the DBX trackers.
Investec S&P 500 Digital Plus: Investec is releasing a new Structure Product, which will be a listed ETF. The investment offers an enhanced return in US Dollars and significant downside protection over a 3,5 year period.
P.S: Closing date for applications is 20 April 2017 and the minimum investment is R60,000 so do not delay. Contact Gavin McCarter on gavin@prodigyam.co.za if you are interested.

Moving swiftly along - Three to buy
Rate this article
Note: 5 of 1 vote