One of the JSEs most undervalued shares, and the good news Zuma's state of the nation address brings for it 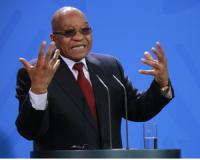 Consolidated Infrastructure Limited (JSE:CIL) is one of those buy and hold for a decade shares.

And it's profit growth has been just as remarkable as it rode the wave of expansion in the renewable energy sector.

Yet, today the company's shares are selling at a low PE of 9.08. That makes CIL's discount to the JSE's All-Share index a massive 60.76%.

But this discount is about to be erased.

You see, a single message in President Zuma's state of the nation address on 9 February 2017 signals great news for CIL.

Why in this case, Zuma said something at the SONA address that is positive for business in South Africa

With CIL operating in the renewable energy space, this means there’ll be a lot of new work flowing in for the company.
In fact, when it reported results in November 2016 CIL grew its order book for its ‘Power’ businesses by 22% to R5 billion. But this excluded R2.3 billion worth of South African work that was on ice.
Now, thanks to Zuma’s speech, we know that the R2.3 billion worth of work will come through – and possibly more.
That’s thanks to the fact that CIL has gone global.
The company produced 53% of its power division’s revenues from OUTSIDE of SOUTH AFRICA.
A lot of that spend was in Africa. But some of it also came from the middle east, which is slotted to be the next big solar energy hotspot, as the Saudi’s try and reduce their reliance on oil…
These are all positives. And I haven’t even gone into CIL’s latest deal, purchasing the largest prepaid electricity company in Africa. That, on its own, is a massive profit opportunity.
This is certainly a share to keep your eyes on.
Here’s to unleashing real value

One of the JSEs most undervalued shares, and the good news Zuma's state of the nation address brings for it
Rate this article
Note: 5 of 2 votes