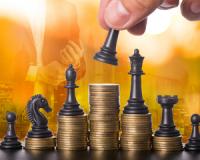 The mainstream media will only tell you about the biggest of the big shares. You'll often hear about Naspers, Richemont and BHP Billiton.

And fund managers will make these big shares the centre points of their investment funds. That is - the Balanced Fund your advisor will suggest you invest in for retirement so you don't need to take much risk.

David Swensen, head of the Yale University endowment fund, pointed out that he also HAS TO consider ‘other' shares for Yale's endowment fund, otherwise the university wouldn't be able to make big drawdowns for funding from it…

The statistics Swensen cites are compelling.

Between the bottom of the U.S. stock market in June 1932 and the end of 2006, the return of this special class of share was 1,592-fold. That compares with, say, a return of 19 times principal for risk-free U.S. government bills.
Discover: Why you DON’T need any experience to invest in these shares
So what is this investment I’m talking about?
Small Cap Shares. Generally, these shares are companies that are worth less than R10 billion – and the majority of them are smaller than R1 billion. On the JSE they are shares in the Small Cap, Fledgling and Alt-X indices.
Whilst you’ll very rarely see them in the portfolio of a large fund manager they have been studied very well.
You see, Eugene Fama, one of 2013's Nobel Prize economics winners, and his colleague Ken French, both of the University of Chicago, analyzed the "small-cap" effect in their famous 1992 paper, "The Cross-Section of Expected Stock Returns," covering the period between 1963-1990.
Their conclusion?
Small-cap stocks were riskier than their large-cap counterparts. But as Modern Portfolio Theory suggests, that higher risk was compensated for by higher returns.
Small Investments, High Returns
During a shareholders meeting in 1999, Warren Buffett lamented that he could generate 50% returns if only he had less money to invest.
He couldn't compound $100 million or $1 billion, at a 50% rate.
That's because it's the smaller, faster growing companies that typically offer the highest returns.
Small capitalization stocks, however, can't help Warren Buffett. For example, if Buffett invested in a $240 million market cap company and its value doubled, the impact would increase Berkshire Hathaway's portfolio by just 0.3%. Considering the amount of research involved, it may not be worth his while.
Buffett stays away from small cap stocks, despite their potential for high returns because he neither wants to cause a run up in the price of a small cap stock, nor does he want a controlling stake.
Recommended: Francois Joubert built his property empire using other people's money. Today his property portfolio is already worth over R6.585 million - Click here to become a master property investor
What the small-cap-effect is, and why it means BIG returns for you
I’ve banked 101.39% on Merafe and 115% on Afrocentric in 2016…
164% on Conduit Capital, 109% on Adapt IT in 2015…
How about 221% on Santova or 270% on Pan African Resources.
So what do all these shares have in common?
They were under the radar small caps at the time. The kind of investments you’d never see in investment portfolios of the big guns.
But thanks to the small cap effect – it was possible to double my capital, and more from these shares.
So how is it possible?
Of the 466 or so shares on the JSE, roughly 350 of them are small caps.
That means 75% of the market is small caps.
But as I just explained, practically every investment fund and fund manager focusses on the big companies.
In fact, there are 1520 investment funds in South Africa. And they are all chasing the 25% biggest shares on the JSE.
That leaves the 75% smaller companies ripe for the picking.
You see, a large fund with R50 billion wants to invest between R500 million and R 1 billion per company.
And with Companies like Naspers, worth R1.4 trillion, that’s easy to do without moving the share price too much.
But if they wanted to invest R1 billion in a small company like Adapt IT, worth R1.4 billion, they’d have to practically buy out ALL the shareholders in the company.
It would simply be to difficult to make this investment for a large fund – not to mention they’d have to put in the same research effort.
So they simply ignore the 75% of the JSE with the most growth potential.
And that’s why I’ve made it my life goal to sniff out the small cap shares with the biggest growth potential.
In fact, I’ve promised my Red Hot Penny Shares readers that if I don’t find at least ONE DOUBLE YOUR MONEY SHARE PER YEAR THEY CAN ASK FOR THEIR MONEY BACK!
And right now, I’ve just finished researching four shares, all with the potential to DOUBLE YOUR MONEY or more all in the next year or two…
If you’d like to know more about the incredible potential of these companies make sure to follow this link.
Here’s to unleashing real value

The Double-Your-Money stock plays your advisors will never tell you about…
Rate this article
Note: 2.64 of 7 votes