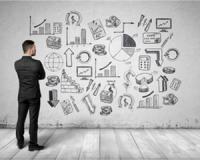 The list of economic indicators released monthly is massive.

So, which of these indicators should you keep an eye on, and which will affect your investments?

I've identified the top five indicators I never miss - which I'll share with you, as well as show you how they affect your investing and where to find data on them each month.

Five economic indicators that matter when you invest

It’s really easy to find the most important economic indicators. I simply get them from the Reserve Bank website, that’s www.resbank.co.za. Then you go to the publications and notices tab and click on Monthly publications. This’ll take you to the page you want to be at. Here you can simply click on the latest report with economic indicators.
In the report you’ll find four pages with more than 110 indicators.
Here’s the five most important ones to look at:

This is the ‘standard’ rate at which banks borrow money. It’s a really important figure because practically everything in our economy is affected by the interest rates we pay.
In the first case, most listed companies borrow money. They use this cash to expand their operations, such as building new factories or mines as well as purchasing more inventory. If the interest rate heads up, the cost to borrow increases. This will affect profits at the end of the day.
In the second case, we as individuals also borrow money for houses, cars or holidays. Higher interest rates affect our spending power and will affect retail sales, property sales and other things that create economic growth. Lower interest rates mean more money available for other things, or more people going out buying homes and cars.
You don’t need to predict interest rates going forward, but you need to at least be aware of them, and understand how they’ll affect your investments.

The inflation indicator tells us how much prices are rising by. The indicator is made up of different weightings, such as rental inflation, food inflation, transport inflation etc.
Inflation can be good and bad. A healthy amount of inflation means companies can increase the price they charge for products, and therefore sales will go up.
Too low inflation could indicate an economy that isn’t growing. Too high inflation will decimate your spending power and isn’t good either.
The SA Reserve Bank uses the inflation figure as one of its main inputs in deciding whether to increase interest rates or keep them constant.
You’ll see that in the latest news, inflation breached the 6% level, which is the upper target range the Reserve Bank set. This increases the risk of an interest rate increase. But, considering how fragile our economy is at present, the Reserve Bank will probably keep interest rates steady.

GDP growth isn’t on my list of economic indicators I watch, but retail sales is. The reason is that GDP Growth figures aren’t released often enough in South Africa. And they only tell you what happened in the last quarter. Retail sales are released monthly and they not just show you what happens on a monthly basis, but give you a better idea of trends that are forming.
If you own retail shares like Shoprite, Pick and Pay or Choppies, this figure will be a good indicator of the market conditions these companies experience. Logistics companies will also be affected by rising or decreasing retail sales, so watch out for that.
The Reserve Bank’s retail trade figure was 111.7 in May 2016, 109.5 in June 2016 and 109 in July 2016. This shows us that retail sales have dropped by +-2.4% in these three months. This is clearly a sign of people struggling to keep up with increasing prices, cutting down on their expenses. So, you can expect muted growth in the retail sector for the next six months, unless this trend rapidly changes.

Total new vehicle sales refer to passenger and commercial vehicle sales. Since May 2016 this figure has dropped from a level of 109.5 to 105.1. This means vehicle sales are 4% lower in four months up to August.
Car sales are even more sensitive to interest rates and the cash in a person’s pocket. People scale down on big purchases like cars before they scale down on buying clothes or food.
So this figure can often show you of a coming change in trend in retail sales early.
If you’re invested in companies like CMH, Imperial or Barloworld that make their money from car sales this is also a very important indicator. Even a company like Onelogix – which transports cars will be affected by this figure changing.

When foreign capital enters South Africa it strengthens the rand, and when it exits South Africa it weakens the rand.
More importantly – the JSE is also affected by increasing or decreasing investment by foreigners.
So watching this figure is an indicator on whether to be bullish or bearish on the Rand and on the JSE.
For this year so far, foreigners have been selling their investments in the JSE and taking their money out of South Africa.
And that’s reflected in the JSE, and the rand both struggling.
These five economic indicators will give you a great idea of where our economy is headed, how it’ll affect sales and profit growth of many businesses and whether the rand and the JSE could see strengthening or more weakening.
They certainly aren’t the holy grail – but the trends they show you are about as close you can come to a crystal ball as possible.
There are hundreds of other indicators available, but most of them show things that happened 3, 6 or even 12 months ago – and that won’t help when you are investing for returns in 3, 6 or 12 months from now!
Here’s to unleashing real value

The five most important economic indicators you should know about and why the rest doesn't matter
Rate this article
Note: 4.14 of 56 votes