The one risk investors have complete control over, but most often overlook… 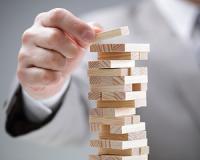 Most types of risks for investors are almost impossible control.

Take politics for example - You have no control over what the Government says or does that could affect the markets.

But there's one type of risk an investor can control - The risk of paying too much for a stock.

This risk is probably the most important risk investors face


Paying too much for a stock could cause you to earn less money or even lose money.

Just remember, the 2000 Dot.com bubble and 2008 stock market crash - Many investors fortunes were wiped out.

Well, stocks became riskier as their price rises. This is because they become overvalued. When a stock's valuation rises too high – like the vast majority did in early 2000 and late 2007 – and risk hits an unsustainably high level, prices are certain to fall sooner or later. And when they finally do fall, it's usually a collapse and a lot of money gets lost.

That’s why paying too much for a stock – Otherwise known as valuation risk is probably the most important risk you face.

One way you can control this risk is by refusing to pay too much for a company. After all, no one can force you to buy a particular share at a particular price.

But as an investor, when you’re looking for the next addition to your portfolio, there are a number of different methods you can use to determine if you’re over-paying or under-paying for a company.

In fact, they’ve been used by the world’s best investors like Benjamin Graham, Peter Lynch and Joseph Piotroski to identify great stocks at good prices.

Usually investors compare a company’s PE ratio with its competitors or sector to determine if it’s the cheapest out of the bunch.


#2: Price to earnings growth ratio (P/E/G) - The PEG ratio is similar to the PE ratio except it takes a company’s earnings growth into account.  And it’s considered a better measurement than the P/E ratio.

In fact, legendary penny stock investor Peter Lynch developed the PEG ratio. The lower the PEG ratio, the more a stock may be undervalued given its earnings performance.

In his 1989 book One Up on Wall Street, Peter Lynch said that, "The P/E ratio of any company that's fairly priced will equal its growth rate, i.e. a fairly valued company will have its PEG equal to 1.”

In other words, investors must look for companies who have a PEG below 1. This could mean a company is extremely undervalued.

Take building materials group Afrimat. It’s on a PE of 14.94 and has achieved a growth rate of 25.42% over the past five years.  This means, Afrimat has a PEG ratio of a mere 0.59 – Extremely cheap.


#3: Price to book ratio (P/B) - The P/B Ratio compare’s a stock's market value to its book value. It’s also referred to as the net asset value (NAV) which shows exactly what a company is worth.

The most famous investor to use the P/B ratio and NAV is bargain hunter, Benjamin Graham. He believed these methods were the secret to picking good value stocks.

For example, if you buy a company with a share price of R22 but it has a NAV of R40, you’ll be buying the shares at an 81% discount to its NAV. Benjamin Graham would think this is great value.

So until next time,

The one risk investors have complete control over, but most often overlook…
Rate this article
Note: 4.75 of 2 votes