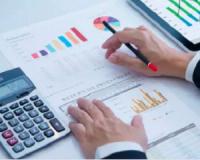 Much of the 1920's was a time of great prosperity and growth in the US.

Many technological developments like cars, radios, electricity became available to the American people.

This economic boom fuelled the fast-rise of the US stock market.

Everybody owned stocks, not only investors. Entrepreneurs, nurses, taxi drivers, you name it. It was everybody's ball-game.

It seemed as if stocks would rise forever. But October 1929 marked a defining moment of investing in the US.

Following a near decade-long bull market, the Dow reached its peak. It then began a sickening decline. By 1932, the Dow had lost nearly 90%.

The Dow slowly recovered to a “normal” level. But the stock market had become a place most investors feared to tread.

In 1934, Benjamin Graham and David Dodd - two of the most famous investment analysts we know uncovered a basic investment truth, which I want to share with you today.

Sam Volkering says a new crypto boom is set to unfold.
Is he out of his mind? Or could he be on to something?
Josh Benton has the answers
CLICK HERE to read his latest findings
________________________________________
The value investment secret every investor must know
As a result of the great depression, the stock market was littered with good quality companies significantly below their market value or worth.
And it was people like John Templeton who were able to buy great value companies for just a dollar and see their one dollar investment grow exponentially on those undervalued quality companies whose price had been driven down abnormally because of market sentiment not because of its true asset value.
Today this significant mispricing in a company’s value is what’s commonly referred to as margin of safety.
And simply put if you can find stocks that have this wide gap in what the market’s view of a stock’s price is relative to its real nett asset value, then you stand to make a fortune when the real value of that company is recognised and the price of its stock shoots up.
And it’s this concept that university professors Dodd and Graham were able to define and teach to people like Buffett.
Look at the graph below to see what I mean… The orange line shows the market value of a particular investment.
The dotted line is the Graham-Dodd system in action, which shows a “reasonable” price an investor should buy at.
The solid grey line shows what the investment is really worth. Or the point at which you should sell.
The Graham-Dodd system is simple. When the price falls below the “Graham-Dodd line”, it becomes a buy. Once it reaches its true value, that’s when you sell.
We have already experienced how profitable this secret can be in Real Wealth. I’ve used it to net gains like 164% on AEEI and 98.55% on Nu-World.
Quite simply, it’s a secret you must know and use to help you uncover extremely profitable value shares at great prices. And it’s especially useful in today’s market.
See you next week.

Joshua Benton,
Managing Editor, The South African Investor
P.S. I’ve just released a report which shows you why I think this investment secret could transform your wealth in 2020 and beyond
Tags: joshua benton, graham-dodd, investing, value investment,

The ultimate secret to pick value stocks with double or triple profit potential
Rate this article
Note: 5 of 2 votes