This company will play a huge role in bringing crypto to the mainstream! 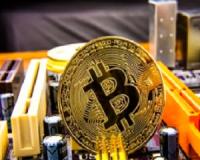 As the crypto economy expands and matures, more and more opportunities have arisen for crypto investors.

And I'm not just talking about crypto coins or crypto miners.

Today, there are numerous cryptos stocks aiming to combine the digital currency and fiat money worlds.

One such company is making huge strides in doing so…
________________________________________
Will you outlive your money?
My colleague Josh Benton recently discovered a way to keep you from being broke in your 80s.
He calls it the "Perfect Retirement Income Accelerator."
To learn more, click here now
________________________________________
Three big deals sets Bakkt up for a huge future!
Bakkt is a financial platform that allows users to trade and store digital assets, such as bitcoin.
Recently, a wave of big news has hit the company.
Firstly, Bakkt tied up a deal with Google. The deal allows Google Pay customers into the world of crypto.
Then, Bakkt announced a deal with Finastra, a fintech banking corporation that serves community banks and credit unions.
In the deal, Bakkt’s crypto payment and management services will be made available to Finastra’s customers, as part of Finastra’s Fusion Digital banking app that will soon be launched.
Finastra’s banking customers can safely join the world of crypto (via Bakkt), without leaving their existing banking environment.
But probably the biggest news for Bakkt is in the middle of October, Bakkt introduced one of the largest fintech companies in the world to crypto…
Mastercard!
That’s right.
Mastercard will now integrate crypto wallets, payment and management functionality into its payment network, using Bakkt’s platform.
That means the thousands of banks and merchants in Mastercard’s payment network will be able to issue their own branded crypto debit and credit cards to those who want them.
Cardholders can use bitcoin purchased through the Bakkt app, or via their own bank.
According to Mastercard, there are currently 2.8 billion Mastercards in use around the world. Therefore, the potential this deal has for Bakkt is incredible.
And it certainly benefits the wider crypto market too. It shows that the massive financial institutions have changed their negative attitude towards the crypto economy, with many now starting to embrace crypto assets.
November marked another huge step for Bakkt
On 5 November 2021, Bakkt announced that it is offering its users the ability to buy, sell and hold ether (ETH), the cryptocurrency of the Ethereum network.
Users can also send ether to contacts directly through the Bakkt app.
Ethereum is the second most valuable crypto, second only to bitcoin. As CEO Gavin Michael said:
“Bakkt users have already enjoyed the app’s capabilities to leverage bitcoin and we are confident that our addition of Ethereum will be a complement to our growing ecosystem of partners and assets.”
Bakkt is quickly establishing itself as a leader in the crypto-fintech space.
And the company will continue to play a key role in bringing crypto into the mainstream.
________________________________________
From zero to 174% in as little
as 93 days
To ordinary South Africans who need extra income,
I make this simple promise:
'I guarantee I can teach you step-by-step how to go from ZERO to 174% in as little as 93 days.
Or I'll give you your money back.'
Urgent Warning: This special offer expires very soon. After that, you may never see it again
________________________________________
Bakkt’s recent deals drew significant interest from investors
In amongst signing huge deals in October, Bakkt (NYSE: BKKT) went public on the New York Stock Exchange.
Unsurprisingly, the recent deals drew significant interest from investors.
After closing just over $9 on 22 October 2021, its share price soared past $30 the following trading day in response to the Mastercard announcement. It then went on to reach $49.22 on 1 November 2021.
That’s a whopping 437% gain in under two weeks!
However, the price has cooled and now trades at just over $26, which may present investors an attractive opportunity to get in.
At the end of the day, Bakkt will continue to be a key link between the cryptocurrency and fiat currency worlds.
See you next week.
Joshua Benton,
Managing Editor, The South African Investor
Tags: joshua benton, investing, crypto,

This company will play a huge role in bringing crypto to the mainstream!
Rate this article
Note: 3.71 of 7 votes