This is where Warren Buffett is putting his money right now 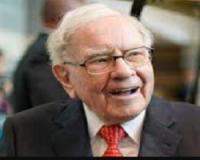 Interest rates and inflation are soaring. The market is down nearly 13% since March. Resource stocks have crashed 30% and more.

Many investors are running for the hills, and you might also ask - “where should I put my money now?” It literally feels like nothing is safe…

Well, usually these are the best times to invest. When stocks have crashed and bargains become available.

Warren Buffett is a genius and has made billions from crisis investing.
Here’s what Warren Buffett can teach you from his top holdings today
Warren Buffett's Berkshire Hathaway has waded deep into the oil business this year, ploughing an estimated $27 billion into two fossil-fuel stocks.

It spent roughly $17 billion quadrupling its stake in Chevron to around 8% in the first quarter and paid nearly $10 billion to purchase over 19% of Occidental Petroleum since the end of February.

Sure – oil will eventually be replaced by new, clean energy. But for the next five, ten maybe even fifteen years it will still play a massive role in modern society. And with the slow pace of new discoveries, plus geopolitical unrest –
Buffett is making a big bet on the price of oil.

In the resources industry we often talk about ‘sweating an asset’. That means extracting the highest amount possible of cashflow out of an asset without spending new money on replacing it.

Many coal miners and oil producers are doing just this now. They aren’t planning for massive new investments. So, there will be big dividends forthcoming.

Buffett’s other two large holdings are totally unrelated to resources.

The stock has had plenty of ups and downs in recent months, but patient investors should look to take advantage of the short-term uncertainty. Coca-
Cola’s long-term investment case continues to be backed by an unrivalled brand presence, massive scale efficiencies, and still-attractive geographic growth tailwinds.

And the company is back to operating at pre-pandemic levels.

In the most recent quarter, Coca-Cola posted revenue of $10.5 billion, up 16% from the year-ago period, driven largely by an 8% increase in unit case volume.

Despite weakness in 2022, Moody’s shares are up 120% over the past five years, suggesting it’s a relatively recession-resistant business worth betting on.

Specifically, the company’s well-entrenched leadership position in credit ratings, which leads to outsized cash flow and returns on capital, should continue to limit Moody’s long-term downside.

Moody’s has generated about $1.9 billion in trailing twelve-month free cash flow. And in 2021, the company returned $1.2 billion to shareholders through share repurchases and dividends.

Buffett stays true to his age-old strategy
From these investments it is clear. Buffett likes companies that:

•    Produce strong cashflows even in tough times
•    Have a moat, or a strong reason for remaining relevant
•    Pay dividends to shareholders
•    Have low debt levels

Keep your eyes on the long-term prize
It is tough to remain invested and focus on long term profits when you see your portfolio drop right before your eyes in a bear market.

But if you’re investing with the goal of increasing your wealth over your lifetime – and you should be – you have to believe that this isn’t the end of the world and the economy will pick up again, with businesses again producing great results.

One thing that Apple, Bank of America, Coca-Cola, and lots of companies have in common is they find a way to adapt to broader economic problems they didn't themselves create. Apple didn't cause the dot-com bubble, Bank of America wasn't the main culprit in the Great Recession, and Coca-Cola didn't cause a global pandemic. Yet each time, they had the resources available to adapt and weather the storm.

There’s no such thing as a fool proof investment. But putting your money behind a company with a strong track record of revenue growth, good cashflows, low debt and a strong motive to exist is a winning strategy in the long run.

PS.  My colleague, Josh Benton has a fantastic report out right now.  It includes the top five dividend stocks on the JSE.  Some of which are paying yields in excess of 10%. His special offer to claim a copy of this report closes on 31 July so I urge you to consider it now.
Tags: investing, dividend stocks, warren buffett, francois joubert, analyst, red hot penny shares

This is where Warren Buffett is putting his money right now
Rate this article
Note: 4.5 of 5 votes