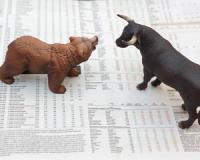 “Triple Witching” refers to the combined expiration of the Index futures, Index options and stock options. In the UK and US this happens on Friday's, but in SA it happens a day earlier on Thursday. The event typically creates increased market activity and in some cases volatility.

Global markets were relatively subdued for last week's expiry, the US, UK and European majors were firmer by between 0,4% and 1%.

However, the JSE rallied 2,3% as market players aligned themselves for the Futures expiry. Our market rebounded from an oversold position after four consecutive negative weeks. The rally culminated in a strong futures close-out at 12:15pm on 16 March and thereafter slide back by about 1%.

Anchor Capital listed two and a half years ago, it has been growing acquisitively and was rated on very demanding multiples. The Share price reached a high of R18,00 and has since fallen by 60%. The company released a new trading statement on Friday, showing that the acquisitive grow caught up with them, but they will grow earnings by about 10%, placing them on a PE of 11,5%. With more growth to come, this is the best value it has ever offered. Buy now at R7,00 with a 12-month view and you should be rewarded nicely.

Naspers appears to be breaking out of its current trading range. I commented before about the Global Trend in Technology and Social media, which has a long path ahead. Results were strong and there in no reason why this breakout could not continue toward a price of R3000. Buy.

In my notes on 27 Feb, Shoprite was a Buy after the talks to merge with Steinhoff were called off. The share has rallied 10% since and we would lock in profit on half the position at these levels. Put the rest on the market at R225.

Imperial is trading below a significant resistance level at R189,00. The stock has failed to break this level numerous times in 2015. Will it do so this time? Consider a short at R188, with a stop loss at R193. With a target of R174.

All too often we see clients neglect their offshore investment decisions until there is panic in the currency. The Rand has strengthened to levels last seen in 2015 (before NeneGate).
We recently rebalanced our Global Portfolio. Contact us if you would like to discuss Offshore Investment options.
Director of Prodigy Asset Management
Guy@prodigyam.co.za