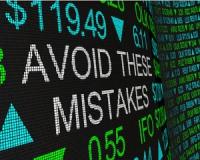 If it were easy, I guess, everybody would be rich.

But as investors, we often make it harder for ourselves to make money and grow our wealth - especially when we continuously fall into - often easily avoidable - investment traps.


Investment Trap #1: The Anchoring or “Focalism” bias
In psychology, anchoring is where an individual depends too heavily on an initial piece of information, when making decisions.
And it’s the same for investing.
The anchoring trap happens when an investor relies heavily on what he or she originally thought.
An example of this is back in 2010, the FIFA World Cup was hosted in South Africa. At this time and a few years after, the construction industry was booming.
Now if you believed that it would continue to grow in the future and invested in construction companies, you would’ve lost a lot of money.
As you’re probably familiar, the construction industry collapsed with once big companies like Aveng, now in business rescue.
So what can you do to avoid this trap?
Always remain flexible when you invest. Things change constantly, and so should your thinking. Be open to new information. And always be willing to change your opinions when the facts change.


*************
How to unleash a steady flow of work-free income... deposited directly into your account
You can tap this stream of passive “paycheque” income for as long as you like!
It doesn’t matter what you decide to do; you’ll get paid either way!
Discover how you can do this too…
*************
Investment Trap #2: The “sunk-cost effect”
I’m sure we’ve all done this…
Bought something thinking we were going to use it every day. But we use it once, and never again.
For example, people keep clothes in their closet that they’re never going to wear. But they won’t give them away since they’ve spent the money on them.
When it comes to investing, the sunk-cost trap happens when an investor buys a bad investment and refuses to sell it – even when it's obvious they were wrong.
And even worse, they tend to put more money into the loser, thinking, "It has to go back up eventually."
The best way to avoid this trap is…know when to cut your losses. An exit strategy like a stop loss is a wonderful tool for combatting the sunk-cost trap.
So the bottom line is, investing is hard... don't make it harder. Be aware of these traps and actively think about ways to avoid them.
See you next week.