What expropriation through inflation means for you 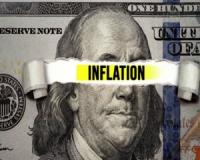 What is a government to do if it has added billions, or even trillions of rands of debt in a short amount of time?

South Africa's national debt increased 30% to R3.7 trillion in 2020. The US printed a fifth of all the money in all its history - in mere months.

Simply put - these amounts are too big to just pay back.

So, these governments need to use another tactic. The ‘raise cash' by a legal form of ‘expropriation'…

Let me explain.
________________________________________
Try Everything We Publish…
Without Paying the Normal
Subscription Fees
Sign up to FSP Invest’s Open House and start receiving our fast-paced stock advisory newsletters, and other independent research TODAY!
By having all of these services at hand, you will always have the right tool at the right time, helping you to achieve consistent gains in ANY market.
Note, you have until Friday, May 31st to take advantage of this offer.
________________________________________
What exactly is expropriation through inflation
Inflation is defined as a general increase in prices and fall in the purchasing value of money by the Oxford dictionary.
Just think about the rising price of cars, petrol, electricity… That’s inflation.
So what does inflation have to do with expropriation?
Well, simply put – if the government can INCREASE inflation, they get to expropriate more of your money legally. And if you have cash – that’s bad news for you.
You see, higher inflation means the prices of everything rises. Salaries rise, retail sales rise, you get the idea. What that also means is that TAXES rise.
And the faster the rate taxes rise by – the easier it gets to pay back government debt.
Imagine a country has a GDP of R1 trillion and R800 billion in government debt (80% debt to GDP ratio).
The country then imposes higher inflation on its population – and inflation increases to as much as 10% that year.
GDP rises to R1.1 trillion, but debt remains at R800 billion, suddenly the debt to GDP ratio improves to 72.72%. If 35% of the country’s GDP is taxes, and it pays 10% interest on debt it will suddenly be able to much easier service its debt as well.
While its interest payments stay R80 billion, its tax income would increase from R350 billion to R385. The R35 billion increase in tax income thanks to inflation is basically HALF of what is needed to service debt…
So how do governments expropriate via inflation?
So how do governments increase inflation to better service their own debt?
Well, they decrease interest rates – or they buy back their own debt on the market, creating ‘artificial money’.
In both of these cases the measures force people with money in the money market, fixed deposits and cash in the bank to transfer their cash to other investments (causing a stock market bubble for instance) or buying assets like houses and cars. Or in the case of businesses low interest rates make it worthwhile to invest in low returning projects, because the alternative of cash in the bank means inflation erodes the value of the money they had…
In the first quarter of 2021 R30 billion in cash left consumer deposits and was spent in the economy. Similarly, the corporate sector did the same.
With a record low level of interest rates, consumers finally started spending those deposits in February and March 2021. Remember, rates are not just there to encourage borrowing but also to promote some cash spending in times of economic distress.
Don’t get me wrong – low interest rates have been needed. They have cushioned the blow of 2020’s pandemic. But the longer rates stay this low, the bigger the inflation impact will be in the long run… And the more the value of your savings are eroded.
Up to now, SA’s been free of this inflation. The rand has been strengthening thanks to huge increases in mining and agriculture exports. A strong rand has kept inflation mainly on fuel prices at bay.
But I expect the rand is close to running its course. It is unlikely to strengthen to a level better than R13.50/USD.
So inflation is coming.
Higher inflation will mean higher interest rates.
________________________________________
Have you got what it takes to accelerate your trading
gains in 2021?
Within a matter of weeks, you could have been making good money from pickpocket trades like these:
• In only 3 days you could have made a gain of 109.89% thanks to fluctuations in the USD/ZAR.
• In just 4 days you could have made a 33% gain from Deutsche Lufthansa!
• With the powerful leverage in pickpocket trading you could have made a 36.23% gain in 6 days on Royal Caribbean Cruises.
Could this be the perfect investment tool for today's unpredictable markets...?
________________________________________
Here’s what this means for you as an investor
Don’t rush in and buy property right now. Sure low interest rates make it easier to afford a more expensive property. But that’s boosted prices of property in many areas, instead of seeing a decrease due to the tough economy.
And if you get a maximum bond with low interest rates, it will kill you once interest rates rise. Remember 1998 – with 22% repo rates compared to today’s 3.5%...
Rather – now is a good time to start paying off more on your credit card or bond. With low interest rates it might not benefit you right now. But once they turn, and they will do in the coming year, you will reap the benefit. And the impact you make on the balance during low interest rate times is much greater than when interest rates are high.
In the meantime I am looking for dividend paying companies. Just imagine a 10% dividend from a share, instead of 3.5% interest from cash in the bank…
And then that stock still has the ability to rise in price as well!
Come inflation – stocks are also a great hedge. Because these companies tend to increase prices with inflation. So your dividends will also grow in the long run as inflation grows…
Here’s to unleashing real value
Francois Joubert
Editor, Red Hot Penny Shares
Tags: francois joubert, investing, inflation,

What expropriation through inflation means for you
Rate this article
Note: 4.75 of 4 votes