What Tesla's $1.5 billion bet on bitcoin means for the crypto market 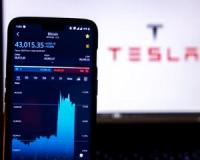 There's never a dull moment in the crypto market.

And last week, it got a whole lot more interesting…

By now I'm sure you've heard, Tesla - one of the world's largest companies - has set its sights on bitcoin.

In their annual report, Tesla announced…
‘In January 2021, we updated our investment policy to provide us with more flexibility to further diversify and maximize returns on our cash that is not required to maintain adequate operating liquidity. As part of the policy, we may invest a portion of such cash in certain specified alternative reserve assets. Thereafter, we invested an aggregate $1.50 billion in bitcoin under this policy. Moreover, we expect to begin accepting bitcoin as a form of payment for our products in the near future…’
And for the last few months Elon Musk has been tweeting about bitcoin. He even added the hashtag #bitcoin to his Twitter profile.
But Tesla’s investment means more than just another big company taking interest in the crypto market...
It shows us that…
Crypto validation is here
What this does however is show us how critical something like cryptocurrency will be to ‘traditional’ corporations in the future.
Bitcoin as the first, strongest, most distributed, most valuable crypto is now providing a genuine financial alternative to companies with an eye on the future.
$1.5 billion of bitcoin isn’t exactly chump change. And considering bitcoin is deflationary in nature, it’s now a smash and grab for major corporations to get some on their balance sheets.
And two other major companies have quickly followed suit…
#1: Mastercard: e-Commerce competitors, PayPal and Visa, have already accepted Bitcoin. Now, $341 billon Mastercard announced it will allow cardholders to transact in certain cryptocurrencies on its network.
The company said it’s “actively engaging” with central banks around the world on their plans to launch new digital currencies.
They already have partners in the crypto space being Wirex and BitPay. But Mastercard has historically required digital currencies to be converted into fiat currencies before processing payments for transactions on its network.
#2: Twitter: The +$54 billion social media giant is the latest to announce it’s considering adding bitcoin to the company reserves. In addition, Twitter is keen to allow payments in bitcoin.
Now, Twitter’s interest shouldn’t come as a surprise…
Twitter CEO Jack Dorsey is a passionate fan of the cryptocurrency. He's also the CEO of payments company, Square, which purchased $50 million worth of bitcoin in October of last year. This represents approximately 1% of the firm's total assets.
So, who’s next?
It wouldn’t surprise me if we see the likes of Apple, Amazon or Facebook wanting to add bitcoin onto its balance sheet.
________________________________________

Just add me to your contacts today and you could be collecting your first pay outs by the end of the week
READ MORE HERE...
________________________________________
This is a trend that we saw coming years ago…
And now it’s playing out right in front of our eyes. The traditional world is validating bitcoin as a viable financial instrument.
Soon, they’ll start seeing other crypto are also as important and viable in their future. And that could see alt coins rally to extraordinary heights.
So if you’re not on board with the crypto revolution yet, then why not?
See you next week.
Joshua Benton,
Managing Editor, The South African Investor
Tags: joshua benton, investing, crypto, bitcoin, elon musk, tesla,

What Tesla's $1.5 billion bet on bitcoin means for the crypto market
Rate this article
Note: 5 of 1 vote